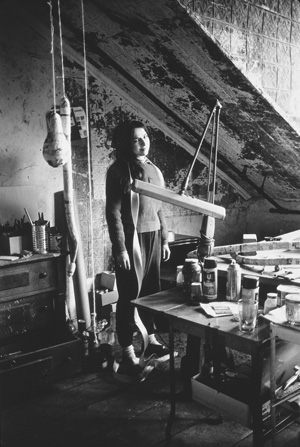 “Lines/Language,” the first topic on the invitation to a recent panel on Eva Hesse seemed loaded with potential. At the event, the same words, when spoken, refocused things quickly: “Lines slash language.” This construction, though I doubt it was intended, seemed to fit this artist’s use of language, that is, in the way her drawn or sculpted lines eclipse verbal meanings. It is only when bonded as titles to her physical pieces that her chosen words exercise their particular potency. These words receive their value from the sculptures, not vice versa. The art informs the language.

Hesse’s titles are her most considered use of language, the only words that she presented to the world as “finished,” to be taken on an equal level with her art. In conferring the status of title to specific words, she separated and elevated them from the lists of synonyms she compiled in her notebooks. She thereby redefined these choices, imbuing them with powerful new meanings and effects entirely dependent on their connections with particular physical works.

The artist’s various verbal jottings in her notebooks and on a number of her sketches indicate a rational effort to “get it right.” This deliberate approach, partly a learning process and partly a weighing of alternatives, contrasts with her studio practice, in which both a conscious sensitivity and some deeper, at least partly unconscious, compulsions played their parts.

From the mid-1960s forward, Hesse’s titles evolved from the jazzy, witty, even literary tags for of the Reliefs (“Oomamaboomba,” “Eighter from Decatur,” “An Ear in a Pond”) to the cooler, more objective words connoting seriality, connection and repetition for the grey works that followed, and to the later latex and fiberglass sculptures (“Several,” “Schema,” “Accession,” “Expanded Expansion”). This change from colorful and specific to thematic and generalized reflects her mature trust in the communicative power of pure abstraction, in the ability of her masterworks’ invented forms and methods of installation to carry the meaning. 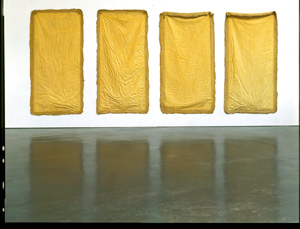 The originality of her titles and their imaginative applications perfectly catch one of the most distinctive characteristics of her work: the viewer’s sense of knowing/not knowing. An initial feeling of familiarity or recognition, followed by an almost simultaneous release into an unrecognized yet magnetic realm of experience, almost impossible to capture in words, is the hook and the concurrent, visual, mental, emotional, and kinetic experience from which Hesse’s enduring power rises. As we encounter these delicate sculptures, move among them, and feel their subtle lure, we “get” them (or they get us) and at the same time we don’t. We may say that the central theme of the work is existence, that ambiguity rules, that we’ll never know, that the whole game is absurd. But words lead us only so far into this irresistible tease that mocks rationality and feels so familiar and yet so utterly odd. What, indeed, is the “sense” of it all?

Still, as desired but elusive signposts, the late titles operate as clues to Hesse’s overall concerns and as affirmations of the consistently cool tone with which she addressed them. The titles also of course perform the most practical function that titles can: they distinguish the individual works from each other. They cannot, however, contain or even frame the experience. Words such as “Sans” (“without” and with a sly hint of “sense”), “Aught,” and “Contingent” can only keep things open for the viewer. To some extent, with their concentration on connections and repetitions, they all say nearly the same thing: intimating that we are on the path, that there is no path, this must be the end, there is no end, here we are again, where are we?

In their near-interchangeability, the titles confirm the connectedness among various sculptures occuping a common area in an exhibition. This congruence is formal, emotional, and thematic. I felt especially aware of this in the insightful installation of major works now at The Jewish Museum. Moving through the spaces of Eva Hesse: Sculpture, one is more aware of a feeling of immediacy and simultaneity than of a definite chronological sequence. One also feels a visual and kinetic equivalence to chamber music, in which each melodic line is represented by a single player and in which the room itself can function as an additional instrument. Similarly, this rich presentation of Hesse’s sculpture—though each work offers a full independent experience—may also lift the viewer into an overall convergence that includes the architecture and even ourselves.

The audio guide at the museum is very fine as well, and it is inestimably heightened by the presence of Hesse’s own soft, clear voice commenting on particular works. A good amount of further documentary and educational material fills a separate room at the end of the exhibition. There visitors may see many diaries, photographs, and a film—all documenting the history of the artist and her family.

The difficulties of getting to the core of Hesse’s meanings verbally are also allieviated somewhat by Bracha L. Ettinger’s essay in the catalogue for the exhibition, Eva Hesse Drawing, at The Drawing Center. Roaming through the complex psychological passageways in her text, the reader feels at least in touch with the primal question of how such work could have emerged from the artist’s mind/body linkages. There is a vitality in the argument that pulls us ever closer to the operations at the art’s elusive source. Rilke illuminates this area of possible birth or creation, its extreme fragility:

That was the deep uncanny mine of souls, Like veins of silver ore, they silently
moved through its massive darkness. Blood welled up
among the roots, on its way to the world of men,
and in the dark it looked as hard as stone.
Nothing else was red.

uncertain, gentle, and without impatience.1

For all its spiritual heights, the work yet has an earthiness,a plain-spoken directness that is as humanly accessible as a folk-tale. I recently spoke with a painter of Hesse’s generation who said that in her studio he felt as though she had taken newsprint, handfuls of it, and chewed it up into a pulp, and swallowed it,and then reached down and pulled long strings of it up out of her mouth, from her gut, and then hung these strings up from the ceiling.

It was hard, her intense decade of mature production, her constant mining of bedrock to resolve her unique forms and methods. Although blocked at times, she was in constant interior motion: probing, modeling, drawing. Through all the mental anxiety, her hand, like her voice, was ever gentle, unrushed.

At The Drawing Center, viewers can explore several areas of major work on paper. On the wide south wall there is a grand procession of the large, colorful, and zany inventions of 1962–65, ending with the single-line organic/mechanical drawings which sound notes unheard anywhere else. In a complementary presentation on the broad north wall, the late painterly ink and gouache works hold sway, yielding wallspace at the end to the tight inkings of rows of Os and Xs that Hesse accumulated into rectangles on pages of printed graph paper. The tender, unforgettable sheets with gradated grey variations on the circle, gridded or not, with threads springing from their centers, or not, deservedly have their own area. Both sides of the large central wall are filled with different kinds of sketches and notes for her sculptures.

Like the sculpture exhibition, this show is graced with a few of Hesse’s signal smaller sculptures and a number of the model size three-dimensional objects called “test pieces.” Whether bold or delicate, they are never fussy: they exist in the same wry territory as do her larger works. In the catalogue for this show, Briony Fer’s fine essay “Sculpture as Sample” thoughtfully examines these intriguing, ambiguous presences: “They are working objects…they are also works.” Responsive and responsible, Fer recognizes Hesse’s combination of logic and a “why not?” approach—that area of knowing/not knowing that is so close to this artist’s deepest sources.

Dangling, twisting, gripping, tantalizing, Hesse’s work retains its ability to surprise and puzzle us, to pull us in and to elude us. It gets under ourskin and into our dreams, it torments and elates. It is still news. It is what Walt Whitman was talking about when he asked,

What stays with you latest and deepest? of curious panics Of hard-fought engagements or sieges tremendous what deepest remains?

No footage? No problem! Eva Hesse: A Feature Documentary Crafted from Archives

We sat in the dusty Manhattan office of a well-known director of art documentaries, towering piles of DVDs threatening to topple over and bury us beneath decades of his work.

five poems from “From a Winter Notebook”

Matvei Yankelevich’s books include Some Worlds for Dr. Vogt (Black Square), Alpha Donut (United Artists), and Boris by the Sea (Octopus). His translations include Today I Wrote Nothing: The Selected Writings of Daniil Kharms (Ardis/Overlook), and (with Eugene Ostashevsky) Alexander Vvedensky’s An Invitation for Me to Think (NYRB Poets), which received a National Translation Award. He is a founding editor of Ugly Duckling Presse, and teaches at Columbia University's School of the Arts and the Milton Avery Graduate School of the Arts at Bard College.