Maria Bussmann counters the unknowable with the unseeable. Her suites of drawings—Following Heidegger, Drawings to Baruch de Spinoza_’s Ethik, Drawings to Wittgenstein’s Tractatus, About the Visible and Invisible of Merleau-Ponty —address the infinity of meanings implicit in her source material by defying the ordinary parameters of visual art. The sheer number of drawings in each series—twenty in Heidegger, fifty-three in Spinoza, ninety-two in Wittgenstein, one hundred and two in Merleau-Ponty­—places most of her images, at any point in time, outside the boundaries of the viewer’s comprehension, just as the philosophers’ texts, thanks to the limitations of consciousness, can yield but a trickle of insights with each reading. In both instances, ideas exist first in latency and then in memory (if at all) after passing through the narrow crossing between presentation and reception. 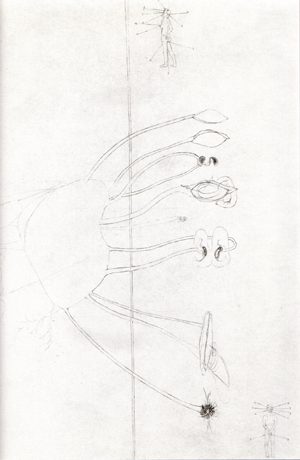 Crossing, or chiasm—a concept derived from the phenomenology of Merleau-Ponty that also means “intertwining”—is a fundamental principle for Bussmann. It is the intuitive spark between the verbal and the visual, the flash of awareness that collapses into a vacuum for her images to fill. Bussmann does not treat philosophy as subject matter or propose to outline a philosophy of art—two hallmarks of conceptualism—nor does she illustrate cerebral constructs, rendering them into a system of pictorial schematics. Instead, she creates a densely woven iconography—which she regards as a commentary on or “addendum to” the text—with the abandon of a saxophonist riffing on a Coltrane chord structure.

In an essay on her Merleau-Ponty series, Bussmann cites the philosopher’s sense of “painting and literature as an expansion or amplification of the body.” Visual art, for Merleau-Ponty, is a “philosophy of seeing” that deepens our appreciation of visual experience, which in turn informs our understanding of philosophy. Yet, as Bussmann reminds us, “there is no ‘simple’ seeing, no such thing as naïve seeing.” Our efforts to enlarge our scope, to seek insights from literature and art, lead us into “the paradox of expression,” in which we experience “the tension between the existing language and the one which is not developed yet, and/or between perception and the not-yet-perceived, i.e., the domain of the invisible.”

For Bussmann, reading philosophy is not a pretext for art-making but an inextricable part of her daily routine. She absorbs a few sentences a day, slowly and meticulously, and then contemplates them, immersing herself in the chiasm, the crossing, the tension—the in-between state of creative ferment that can’t be consciously examined without distorting its essence. She develops her images first in the margin of the text, then in a preparatory sketch and finally in a finished drawing (although this is a fairly cut-and-dried description of an ongoing, organic and unpredictable process). Occasionally, an image will leap spontaneously to mind, fully formed, in response to a line she read days earlier. 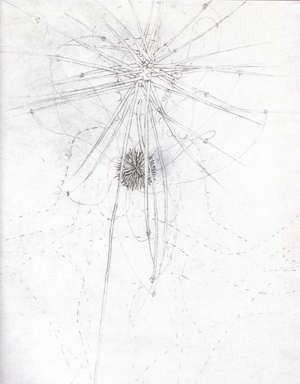 Bussmann’s equation of drawing with thought compels her to push her forms toward the condition of thought—ephemeral, incorporeal, invisible—another manifestation of the “paradox of expression.” She draws on thin, almost translucent paper with extremely soft pencils, continuously sharpened by hand, to achieve a fluid yet delicate breath of a line. These Ingres-like filaments caress the contours of a form with a volumetric precision that suggests the Platonic ideal of a thing rather than its quotidian reality. Sometimes she draws a line or shape on the back of a sheet so that it barely registers as a visible element on the front—pushing the concept of a visual referent for invisible thought to its physical limit.

The classicism of Bussmann’s line evokes as diverse a crew as Leonardo, Klee, Beuys and Wölfli, encompassing an array of imagery from the diagrammatic to the baroque. Despite their heady pedigree, the pictures themselves are loosely structured, playful, even funny. Images roam across the page like drawings from a loopy treatise on physics or botany, combining studies of observed reality with seemingly random pictograms, numbers, words, lines and arcs. Yet Bussmann’s flights of imagination, no matter how mercurial, are tempered by an incisive critical intelligence that binds the imagery within the series’ conceptual framework. She sometimes employs a set of a priori signposts (the arrow emblematic of infinity in Wittgenstein, the allusions to mountain hiking in Heidegger) to impart a subliminal sense of unity to each drawing. And Surrealist compactions, like a centaur embracing a mermaid or a woman’s torso composed entirely of petal-shaped eyes, are grounded by pictorial elements immersed in the day-to-day—Bussmann’s own long-fingered hands, her plants, the view outside her window.

Bussmann grew up in the Bavarian town of Würzburg, where she was born in 1966, in an educated but provincial middle class household, surrounded by music and books but afflicted with childhood dyslexia, a condition that, through her struggle to read, developed her sense that a text reveals itself slowly as an embedded structure of meaning. Although she had limited exposure to the visual arts in her early years, drawing had always been a pleasure and a refuge, and when the time came to choose a career, she decided, quite implausibly in her parents’ eyes, to be an artist. She enrolled first in the fine arts academy in Nuremburg and then in Vienna, where her most celebrated professor was the legendary Austrian wild man Arnulf Rainer. The academy’s prevailing aesthetic was macho, malerische Neo-Expressionism, in which Bussmann felt hopelessly out of place. She turned to philosophy, entering a doctoral program at the University of Vienna and eventually writing her dissertation on “Mysticism in Abstract Painting” (focusing on Newman, Rothko and Malevich). It was during her study of philosophy, not fine art, that her sense of herself, her art and her intellectual passions flowed into a single channel—an instance of personal chiasm—and she began to draw from philosophical texts.

While a student at the Viennese academy, Bussmann turned down an offer to work as a studio assistant for Rainer, who was then involved in his notorious “overpaintings” of medieval prints. The prospect of striking an important connection, of networking or advancing her career, didn’t even enter Bussmann’s mind. She simply did not wish to place herself in a subservient position to an overpowering personality like Rainer’s. Years later, as her work began to be known in European art circles, she refused to show in the “emerging artist” space of one of the continent’s most important dealers because it shared its premises with a cell phone display counter. And when collectors started to take an interest in her work, she decided not to sell her drawings piecemeal but to retain the integrity of the suite: either the series sells in its entirety or not at all. Consequently, her most ambitious project to date, the 102 drawings of About the Visible and Invisible of Merleau-Ponty, sits unsold in a storage box in Vienna.

As much as these actions sound like the behavior of a capricious, headstrong diva, Bussmann is anything but. Soft-spoken and self-effacing, with a willowy frame, liquid eyes and dark, chin-length hair, she has lived quietly for the past two years with her husband and baby daughter in several modest rooms of an in-progress East Village renovation. The ironclad certainty that governs the integrity of her art is offset by an acute vulnerability and self-doubt. After she started drawing from philosophical tracts, it took her months before she felt confident enough to show them to her friends, and even today she fears that they may not be “consequent”—her term for logical, planned, structured—enough to approach the weightiness of the texts

In her tiny studio, partitioned by a new wall from her daughter’s room, she sits at a table between a bookshelf and a long-silent cello (she hasn’t had time to touch it since the baby was born), reading and drawing. She often prefers an English translation of a text over its original German or French (her first and second languages) because she believes that the levels of meaning she needs to traverse while parsing through the translation paradoxically yields a deeper understanding of the philosopher’s intent. She likens the process to her studies in Greek and Latin, in which meaning lay in the grammatical structure of declensions and cases, and not in the face-value translation of the words.

When Bussmann’s baby was born, the inevitable shift in her life and worldview brought about an earthier state of things, and her art necessarily shifted as well. She began a series of unusually dense drawings of her daughter’s toys that feel far more anchored to the everyday than her previous work. Still, they have a peculiarity to them—thanks to their high-contrast black-and-white rendering of brightly colored plastic—that feels both poignant and quietly absurd. The drawings come from her reading of the last chapter of Hannah Arendt’s The Life of the Mind, titled “The Abyss of freedom and the novus ordo seclorum,” in which Arendt focuses on the idea of natality, or the beginning of life—a sharp contrast to the fixation most philosophers have on mortality, life’s end. In one trenchant passage near the end of the book, she discusses St. Augustine’s City of God, in which Augustine states that human beings owe their lives “not just to the multiplication of the species, but to birth, the entry of a novel creature who as something entirely new appears in the midst of the time continuum of the world. The purpose of the creation of man was to make possible a beginning … The very capacity for beginning is rooted in natality, and by no means in creativity, not in a gift but in the fact that human beings, new men, again and again appear in the world by virtue of birth.”

The gift of creativity, thereby, is humbled by the eternal cycle of creation, and each new creation is a unique entry into the endless chain of existence. Bussmann’s drawings, in their multiplicity, grace, absurdity, beauty and doubt, face up to each individual soul’s ultimately untenable chiasm of faith, futility and silence. In her next project, Bussman will return again to Heidegger, but instead of graphite on paper, she will use chalk on a blackboard. After each drawing is finished, she will erase it.

Thanks to Tanja Weingärtner for her assistance in making this article possible.