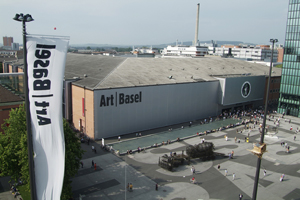 In my original notes covering the Basel art circus, I emphasized what, in retrospect, seems a tired take on the art fair phenomenon. My thoughts (like many before me) revolved around the desensitizing and disenchanting effects of being confronted with so much work in a short amount of time. I wrote about how all the paintings started to look like sides of beef waiting for processing. I remember thinking to myself that all the Katzes and Rymans and Kusamas and Koonses gave me a feeling similar to going into the back kitchen of my favorite restaurant and watching my veal get pounded into scallopini by the sous-chef. But I came to my senses and relaxed a bit. Why cross an ocean to see what you know is a gaudy and excessive undertaking and then sulk about not coming away enlightened?

With this in mind, I threw away my notebook and let the wider experience soak in naturally. I would write what I remembered. After days of intense art exposure this proved beneficial. I felt energetic and positive; I stopped talking about the market and was no longer hostile about all the Alex Katzes. Still, I limited my time at Art 38 Basel and attended scores of other smaller events.

There were six fairs running during the week along with a Robert Gober retrospective at Schaulager, an Edward Munch show at the Bayeler foundation, the Swiss art awards, a Johns show at the Kunstmuseum and dozens of independent projects looking to take advantage of the hungry crowds of art fans that converged on the city. Basel has a much different dynamic than the other fair hubs. It’s provincial and quaint. Although the same crowd that was in Basel will be in Miami and New York in coming months, Basel feels it more. The fairs hit New York like a raindrop hitting a roiling ocean, and the events in Miami are subsumed by the perpetual din of nightlife and neon. The impact on Basel was exacerbated this year by the thousands of pilgrims on their way from the Venice Biennale to the opening of Documenta in Kassel and the Münster Sculpture project. The occasion was as interesting sociologically as it was artistically. It gave me a chance to see my discipline in the mirror.

Locals seemed unconcerned with the teeming crowds of conspicuous art insiders roaming like herds of caribou in the Mezeplatz. The city was impacted physically more than psychologically. I had two cab drivers tell me that Art 38 Basel was mild compared to the electricity of the annual watch expo the town hosts each spring. In Basel, the art world tended to herd into large packs of its own kind, taking over social venues, standing out from the locals in the Campari Bar at the Kunsthalle. This was the case at the Liste fair—billed by its organizers as the “young art fair”—on the opening evening. Art wonks, overdressed collectors, and half of Williamsburg spilled out onto the blocked-off street from Liste’s maw to consume sausages slung from a concessions tent. From the intersection beyond, locals glanced curiously before strolling to their local nightspots.

The Liste opening was the most likely place to run into the person living one floor below you in Greenpoint. With good navigation skills and no fear of cramped spaces, it was a good place to see a lot of edgy, if not astounding, art. It was clear that Liste was staking its claim as Basel’s W. 27th Street—Foxy Production and Wallspace were both present at the fair. Foxy showed an interesting video by Michael Bell-Smith and Wallspace did a great job with their irregular slice of real estate, particularly Wallead Beshty’s work. Others of note were Konig from Berlin, who showed Tue Greenfort. It wasn’t the best work I’ve seen of his, but it was enough to evidence what a great artist he’s developing into. Team and Mogadishni from Copenhagen also had great spreads.

From Liste, I took a rainy boat ride down the Rhein with some friends to the Volta fair, held next to a shipping container repository about a mile downstream. Volta turned out to be a hidden gem. It was geographically challenging but word of mouth seemed to lure plenty of visitors. I saw dozens of familiar faces at the venue. ZieherSmith, forging ahead with integrity, showed drawings by Eddie Martinez. Roebling Hall, Rivington Arms, Canada, Derek Eller and Leo Koenig were also there. Roebling Hall featured great work by the increasingly high-profile Eve Sussman as well as Erik Benson and Sebastian Bremer. Meanwhile, Sussman’s husband, Simon Lee, scooted around town in a trolley he converted into a camera obscura. With so many objects on display, Lee’s “Tram Obscura” was a needed project-based break.

Art Basel featured two sections that offered additional relief from the commercial art world. Art Statements invited 26 galleries to put on solo shows by their artists, while Art Conversations provided space to invited artists to take on solo projects. The list of participants included a sampling of mainstays from Katharina Grosse to Stephen Prina to Allen Ruppersberg. It showed how good art can be when its makers are given space and relieved of restrictions. While collectors at the main fair were elbowing each other to get their hands on a Warhol, Pierre Huyghe’s sensory-deprived environment compelled some people to lie down on the floor to decompress. Aside from the smell of machine-made fog conjuring an air of discothèques, it was terrific. Omer Fast, who shows at Postmasters in New York, exhibited one of his singularly effective video pieces with his now-standard set of disjunctive tactics. “The Casting” featured a United States soldier giving a monologue that bounced back and forth between his account of an accidental shooting at a checkpoint in Iraq and his own domestic miscommunications: topical and perfectly executed. A poetic sculpture by Kristjan Gudmundsson, entitled “Blue Transmission,” featured two I.V. bottles releasing drops of blue ink onto industrial-size rolls of paper. The ink soaked in and penetrated the dense objects, splashing onto my white shirt. Otherwise, I really enjoyed it. Although we’ve been inundated lately with the Phil Dick, post-apocalyptic aesthetic, Christoph Buchel’s “Simply Botiful,” an ambitious city constructed out of trash and industrial debris, was something to behold. If you’re going to do it, don’t hold back. He took the back corner of the hangar-like space and converted it into a dwelling/community heaped with old computers, campers, and buckets of sludge, complete with a makeshift bar serving up Heinekens and industrial music. Cigarette butts and chicken wings littered the grounds, bringing smell into the mix. It was nauseating but memorable.

Down the road from Art Basel was the Scope fair’s first foray into the Basel proceedings. By many accounts it functioned as the evenhanded medium between the stodgy main fair and the ultra-youthful Liste and Volta fairs. It featured a number of venerable and consistently good galleries from New York and around the world. Jack the Pelican had a topical and eye-turning installation by Brooklyn native Natalie Lanese, and RARE had some great paintings by Welsh artist Ian Hartshorne. Overall the fair came across as confident and experienced without the insouciance of Liste or Volta.

Balelatina, a fair dedicated to Latin artists and galleries, entertained plenty of visitors and was generally very good. Like Scope, it won points for its lack of posturing. It gave visitors a unique perspective on the Latin art world, demonstrating the effects of a global aesthetic. Most of the work would have been perfectly comfortable in a storefront on W. 25th Street. Also vying for attention in the clamor was the Basel Print Fair which offered a bounty of good work from a lot of familiar sources.

Like trying to sip water from a fire hose, there were limitations in what one could imbibe at Basel. In addition to the fairs there were numerous award presentations, panels, a gallery of Tadao Ando models, film screenings, lectures, and a never-ending stream of parties and mixers.

I learned that if you care about art on a deep level and aren’t into speculating about its value, stay away from the secondary market. I learned that if you’re a young sculptor and you’re not Olafur Eliasson, you might want to proceed with great discretion when using neon tubes in your work. It seems artists of all stripes these days are inexplicably fascinated by deer, antlers, the forest, and anything mystical, pagan or talismanic. Oh, and lots of skulls. It occurred to me that Lyotard was right about the end of the metanarrative; I didn’t see any sweeping historical movements waiting to emerge, just pockets of artists drawn together by similar sensibilities and imagery. I also realized that no matter how much you like to experience great art, no matter how much mental stamina you think you have, you need to take breaks to sit down and have an occasional teewurst with a beer or, better still, a nap inside a sensory-deprived Pierre Huyghe environment.

notes towards becoming a spill

notes towards becoming a spill is a semi-autobiographical, experimental opera performed at the shore of the Atlantic ocean. It is a narrative revealed through the dancing body about transformation and the histories that haunt Black queer men.

Underground music, the stuff at the margins, is vital to the health and longevity of future music. It almost exactly follows the rhythms of human life, with one generation giving birth to and raising the generation that follows and will replace its parents, again and again and again.