In the chilled air of early spring, Lake Huron stretches into a crystalline body with no end in sight. The second largest of the great lakes, Huron borders most of Michigan’s east coast. In Ann Mikolowski’s “Ghostrider” (1988), thin layers of oil paint split the lake’s horizon into a sweeping gray and a turbulent blue that, together, evoke Mark Rothko or Barnett Newman in their consuming passage to the sublime. 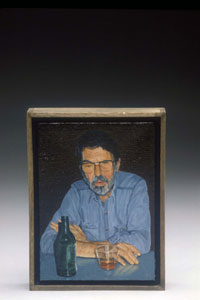 “Ghostrider” is one of a series of large-scale land and waterscapes that Mikolowski, a Detroit native, made from 1974 until her death in 1999. The paintings followed Mikolowski’s move with her husband, poet Ken Mikolowski, and their children from Detroit to Grindstone City, Michigan, a bygone industrial town about midway up the coast. They portray fragments of the area around her home (and, later, other seaside regions) with the silent strength of nature itself. They also serve as counterpoints to her miniature portraits, begun in 1973, of the artists and writers she welcomed into her best-known work, Detroit’s legendary Alternative Press.

In 1969, the Mikolowskis founded the Alternative Press as a grassroots effort to bring the work of both unknown and known artists to a wider audience. Postcards, bumper stickers, poems and drawings by Allen Ginsberg, Andrei Codrescu, Brenda Goodman, and many others, were among the materials that the couple hand set and letterpressed in the basement of their Avery Street home, and then stuffed into manila envelopes for subscribers throughout the country.

The press continued with annual mailings until Ann Mikolowski’s death, and her memory remains inextricable from its legacy. Two concurrent Detroit-area exhibitions, Ann Mikolowski: Two Ways of Looking in a Mirror at Center Galleries at the College for Creative Studies (her alma mater) and Ann Mikolowski: Works on Paper at Paul Kotula Projects, recognize Mikolowski’s contributions as a painter, which had been obscured by her collaborations and virtually left out of exhibitions celebrating the Alternative Press in 1990 and 1999. Two Ways of Looking (which features a catalogue essay by ’s John Yau) is a warm, familial exhibition; it is also the first, as far as Ken Mikolowski remembers, to juxtapose the portraits with the land and waterscapes.

The portraits–the largest of which measures only three by four inches–depict Mikolowski’s friends, acquaintances and collaborators in informal moments: in one, Elmore Leonard sits at an outdoor table with outstretched arms and an animated grin; in another, Faye Kicknosway slumps at a typewriter amid a flurry of office papers, plants and pinned notes; in yet another, William Burroughs poses, haughty and stone-faced, against a pale wall. 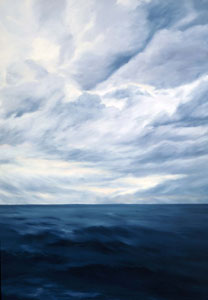 Mikolowski began the series as a sort of portable painted community to carry with her from Detroit to Grindstone City. As a result, they’re difficult to separate from the context in which they were made. Lined up along a wall, the thirty in the Center Galleries exhibition assume a collective feel, as if each one addresses a historical chapter that leads back to the artist’s grand narrative. The problem is that history can overwhelm the image; the nuances, lines and gestures of the picture become the sediment of a story. Mikolowski’s attention to the physical details of her subjects reflects her understanding of each sitter’s interior by way of the exterior-the portraits parallel photographs, as traces of something past, but they render the person, more than the moment, in time.

Mikolowski’s process was rigorous. To achieve an almost photorealist accuracy on the tiny canvases, she worked with modified brushes, pared down sometimes to a few bristles. In a portrait of the poet Robert Creeley, the soft folds of the poet’s denim shirt seem palpable in the shifting blue hues. Creeley’s lips are parted slightly; a cigarette between his fingers is burned down; a green glass bottle, reflected on the countertop, is visibly low. Each detail in the portrait is an invitation into the poet’s private space, and the artist’s.

Amid an art community in the 1970s preoccupied with the detritus of a crumbling, post-riot Detroit, Mikolowski’s paintings read like glimpses of a fabled world. During the ‘80s and ‘90s, her realism countered the broader theoretical positions of postmodernism, which pointed away from reality and toward the simulacrum. Mikolowski’s work was, and remains, neither an avowal nor disavowal of the real (and realism), but the evocation of a personal reality. In one of her only self-portraits, she sits, smiling, against a wall of evergreen trees. The portrait translates the infinitude of time and space into an elegant language of moment and place–of an ordinary moment that is noticed for its singularity, and then passed by.

The same sense is evident in the land and waterscapes. “Red Sky” (1987) is a vast field of clouds glowing red in a violent invocation of nature’s rule. The image, like “Ghostrider,” suggests a spiritual dimension beyond itself. Here, though, nature is necessarily of the material world; the sky’s relationship with the water, the land and the artist infuses it with the wonder of its banality.

In Mikolowski’s realism, simplicity is achieved through complexity. Her reputation as a generous advocate of the arts at times superceded her artwork perhaps because its straightforwardness lent itself to an oversimplified view of Mikolowski as an artist who painted “Polaroids” of her friends, as they were, from her own Polaroid photos. But nothing is painted “as it is.” Though her painting’s complexity is a testament to her technical prowess, it’s also bound up with her recognition of herself within and through the art. She rendered her subject matter extraordinary, but did so without wrenching it loose from the domain of the ordinary. And by framing her moments in time as no more than moments, she allows them to breathe.