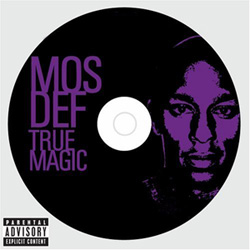 Mos Def’s True Magic is anything but the throwaway recording it is often accused of being; it is in fact a very serious culmination of this hip-hop artist’s musical progression. Released quietly by Geffen in late December, it featured no artwork or sleeve, simply a photo of Mos stenciled straight onto the CD inside a clear case. It was quickly and mysteriously yanked from stores by the label shortly thereafter, the rumor being that it would be re-released “properly” sometime in the spring. After Mos’s much-ballyhooed 1999 debut, Black On Both Sides, and his followup, the 2004 rock/hip-hop hybrid The New Danger, accusations that he was operating on cruise-control dogged True Magic. But whereas those earlier records felt mashed together to make a whole, True Magic is a lean, straightforward hip-hop record. Stripped down and spare, it’s a retro b-boy tome—lyrical dexterity coupled with Mos’s unique vocal take on the African-American musical tradition. Along with a series of gigs he and his live band performed at the Brooklyn Academy of Music in February, True Magic represented a deep reflection on the state of hip-hop in 2007.

Mos has become famous for the spirited live performances he’s sprinkled across New York over the past few years—experimentation with his hard-rock band, Black Jack Johnson, as well as performances with various jazz ensembles. His shows at Blue Note in 2004, in which he reportedly stepped aside and let the musicians rule the night, explored Miles’ Bitches Brew along with an energetic, if eyebrow-raising, interpretation of Beyonce’s “Crazy in Love.” Along with an early 2007 performance at Jazz at Lincoln Center, these performances have become legend. At BAM, Mos performed with pianist Robert Glasper and a bass/drums/guitar core band, along with a DJ, Preservation. The band’s tenor and soprano saxes were augmented by the eight-member Hypnotic Brass Ensemble, recently transplanted from Chicago. Blowing away the BAM Opera House with rich, textured horns, this was a band to be taken seriously. Everyone, including Mos, wore matching T-shirts with a photo of Barack Obama and the words “So Fresh, So Clean” stenciled in green-and-red block lettering. (On the back was a photo of the slain Sean Bell.)

What was startling to attendees of the BAM performance’s mixture of classic hip-hop, R&B, jazz interpretation, and rock—a different kind of American Songbook—was the realization that this was the promise hip-hop offered back in the 1980s: a sampling and reinterpretation of songs from across the musical spectrum. The Brooklyn audience—culturally diverse like the borough itself, but heavily African-American—was so taken with the band’s lively cover of BBD’s “Poison” (Mos recreating the crouching circle dance from the music video straight-faced) that the house was nearly brought down. Imagine a blaring horn riff in place of the line “That girl is—poi-sunnnn.” Mos’s powerful interpretation of “I Put a Spell on You,” starting out a cappella and then taken up by the band, was nuanced, owing as much to Nina Simone’s cover as Screamin’ Jay’s original. A sense of rapture permeated the air in the Howard Gilman Theater as Mos connected African-American musical traditions, the audience like starving multitudes fed food they hadn’t realized they were hungry for.

At BAM, Mos visited portions of the old-school “Undeniable” and the love-gone-wrong plea “U R the One,” comfortably traversing a spectrum of musical styles, making them his own. (Unfortunately, he didn’t perform “Napoleon Dynamite,” one of True Magic’s high points, a blaxploitation funk tune with choir-like accompaniment and a layer of lyricist-lounge storytelling on top.) The sheer breadth of the material was bewildering: Neil Young’s “Like a Hurricane,” the Pharcyde’s “Passing Me By.” If indeed hip-hop is a contemporary cousin to jazz, then experimentation with its parameters must be the rule rather than the exception.

Like its predecessors, True Magic finds Mos singing as often as MC’ing. There are those who take exception to his tendency to croon unabashedly as much as he raps, but they miss the point: This is the complete package. Mos puts any number of contemporary R&B singers to shame, pairing vocal range with impressive lyrical and spiritual depth. Vamping on Stevie Wonder’s “That Girl” with his own “Hip-Hop” at BAM, he is Marvin Gaye enveloped inside KRS-One—a deadly combination. When Mos put aside his singing to spit “Life Is Real” off The New Danger, he was refusing to be pigeonholed as one particular type of performer. Often accused of neglecting music in favor of his burgeoning acting career, he responds with these periodic, powerful live performances. True Magic, a rap record with hints of soul, rock, and spoken-word jazz, represents what hip-hop really is: all of these and yet none. Like jazz, attempting to define hip-hop in a world of Lauryn Hill, Japanese turntablists, reggaeton, and Brazilian baile (and retro heavy-rockers Earl Greyhound, who played upstairs in the BAMcafé after Mos’s Saturday performance as part of a Black Rock Coalition residency) is pointless.

Something of a political artist, if anyone in hip-hop or popular music can don that hat, Mos has produced one of the most unabashedly scathing critiques of the Bush administration’s response to Hurricane Katrina in “Dollar Day (Surprise, Surprise),” off of True Magic (with beats borrowed from New Orleans’ Juvenile). A selected sampling of its lyrics, verses of which were performed at BAM:

It’s Dollar Day in New Orleans
It’s water, water everywhere and people dead in the streets
And Mr. President he ’bout that cash
He got a policy for handlin’ the niggaz and trash
And if you poor or you black
I laugh a laugh they won’t give when you ask
You better off on crack
Dead or in jail, or with a gun in Iraq
And it’s as simple as that
God save these streets
One dollar per every human being
It’s that Katrina Clap
(Clap, clap, clap, clap)

This is something of the political promise of hip-hop twenty years ago. One can only imagine Geffen’s reaction when Mos was arrested by police outside Radio City Music Hall during the 2006 MTV Video Music Awards, attempting to perform “Dollar Day” from a truck bed stage. (Peep the YouTube footage.)

As powerful as the BAM performance was, it was not impeccable—extremely loose to the point of being informal, like sitting in on a rehearsal. The long rests between songs invited much verbal jockeying from the rowdy balcony crowd. And True Magic itself comes off more like a demo than a finished product at times. I’m still not sure what to make of Mos’s incessant sampling of well-known, previously used hip-hop beats. On The New Danger it was Jay-Z’s “Takeover,” while True Magic uses the GZA’s “Liquid Swords” and the UTP crew’s “Nolia Clap.” Is there some kind of referential language being spoken, or is it just lazy filler? Mos appears to be attempting to connect historical and musical dots (Juvenile and UTP being from New Orleans), but a deeper meaning seems elusive.

A colleague who is a fan says that though she finds “U R the One” candid about the politics of romantic breakups, she nevertheless thinks the lyrics overly provocative and profane. Mos finds himself donning the “conscious rapper” mantle for one wing of the hip-hop community, but too “street” for those expecting constant political piety. Of course, most of our hip-hop heroes straddle the line between saint and pariah, and doing so is more a sign of vitality than a negative.

With at least half a dozen films set to be released soon, as well as book deals and his music, Mos has evolved into a potential heir to the title of “hardest working man in showbiz.” Anyone who doubts his being one of the most exciting artists in contemporary music need only have caught one of his BAM performances. Indeed, it’s a shame that more people outside of New York City will never see these live performances—the hip-hop world in 2007 needs the example, if only to remind us what hip-hop can be, and as a counterpoint to limited interpretations on MTV and BET. An MC accompanied by a live brass band interpreting Madvillain’s “Rainbows” should be beheld by as many contemporary music listeners as possible.

For all of its shortcomings, True Magic’s promise is immense—minimalist hip-hop with bursts of rich, textured song. Whether the record will be given a proper release is anyone’s guess. We need this type of record though, as we need Mos Def. At BAM he closed, appropriately, with De La Soul’s “Stakes Is High.” Giving the crowd a little of what it wanted—he had been badgered from the balcony all night with requests for Black Star’s “Definition”—Mos enfolded inside the De La verses from his “Umi Says.” It was a poignant close to a powerful night.

Allie Rowbottom’s debut novel, Aesthetica, alternates between the world of nineteen-year-old nascent influencer @annawrey and that of the thirty-five-year-old Anna Wrey who wears the scars of countless elective surgeries that, when seen in the full context of industrial beauty, don’t seem particularly elective at all. More than anything else, Aesthetica investigates the fallacy of reversibility. When young, don’t we all imagine that life is a series of attempts that can more or less be undone without permanent consequence? Once we step into the light of reality, we realize that there is no fairy godmother waving a magic tv remote with a giant double arrow button reading REWIND. The particularly graceful move in Aesthetica is to advance beyond the commonplace observation that plastic surgery is a futile attempt to flip the hourglass; instead, Rowbottom asks us to imagine a cosmetic procedure that would undo the undoing, reverse the decisions a public figure might make to look like the fantasy version of their true self.

These canvases might be deciphered over hours of observation, tracking the drifting daylight across brushstrokes to determine exactly which pigment, applied in which order, formed these pictures. I’m envious of that exercise. But I’m also content with my situation, where there is room left for magic.