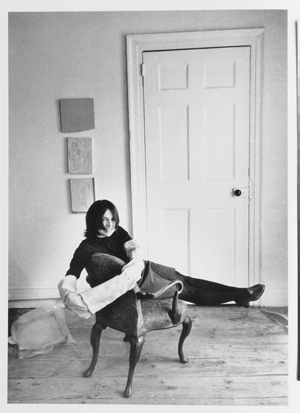 I first learned about Eva Hesse while I was in undergraduate school at University of the Arts through a former teacher, Ree Morton, who would talk about Hess and her work profusely in class. Morton identified strongly with Hesse’s radical spirit of invention and play—letting things hang out, running things up the flagpole, breaking the rules. I saw that Hesse had opened up something for Morton; she was given permission to raise the stakes. It was a compelling experience for me to see Morton having a dialogue with Hesse’s legacy. When you are young, you learn to identify intuitively with the artists (of all ages) who are pushing it, trying new things, artists who have decided to work in the present. Everything is up for grabs, anything is possible. Year after year students and young artists relate to Hesse that way. They can see that she had discovered her own way of connecting with the materials and forms by having her feeling and thought work in unison, by working in the moment from a place of deep inwardness.

Whenever I’m asked to give a slide presentation of my work, I never miss the chance to include Hesse’s masterpiece “Repetition Nineteen III” 1968 (nineteen fiberglass cylinders, each one subtly different from the next, arranged casually in a group) as a touchstone that has had an profound impact on my thinking as a sculptor. Hesse’s cylinders are objects from her mind, conceived in fiberglass, extracted and placed outside herself. Serial form, “This, then this, then this. Over and over again, approaching, getting closer, getting nearer. Letting go, standing back…things recede, they diminish,” in her case, emphasizes her particular way of relating to what was the pervasive trope being practiced in Minimal, and process art at the time. Not involved with a cool, calculated look, Hesse had the capacity to entertain doubt, be vulnerable and see absurdity, giving her the ability to pare away and reduce things, to find the place that simultaneously expands and contracts, a place that is, and is not. Hesse walked an exquisitely defined edge joining proportion and emotion. It is a place full of contradictions, and all the more powerful for them. Looking at her work is invariably inspiring, gripping, challenging, and forceful. 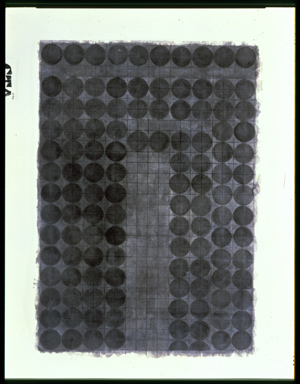 There is the myth frequently cited in popular reading that Hesse had to pay for her work with her life. Her materials killed her. Although quite toxic, polyester resin doesn’t automatically give people tumors. Plenty of boat builders will testify that their livers paid a price over a long period of time until they started wearing respirators, or using fresh air systems. Robert Mallory, a sculptor, wrote an article about his body’s complete rejection of polyester resin. Beyond the technical facts, many people find something tragically appealing or darkly appropriate about the notion that Hesse died for her work, a victim of her passion. I have never understood this- what is tragic is not having the result of the entire arc of her production. I would have loved to see what she would have done, who wouldn’t? But the idea of paying the price of greatness as an artist with your life is a niggling way to value her achievement and her ambition.

I worked for the sculptor and painter Nancy Graves for a number of years. She told me Hesse came back the day after a party Nancy had thrown to get an umbrella she had “forgotten.” Hesse wanted to further her acquaintance with Graves. Nancy said this was how ambitious artists did things—make sure you meet the people you want to meet, and get to know them, by whatever means necessary. Nancy gave Hesse plaster gauze to try out. She had tremendous respect and a some envy of Hesse—that envy was new to me too. I realized that no matter what artists had accomplished, no matter where and how they had exhibited their work, this was a competitive field. Everyone was straining for more, working on getting more of what they felt they deserved.

Today’s climate is biased towards spectacle and entertainment, journalism and discourse. A discourse of “referencing” and naming in a dumb, literal, flat-footed way. Hesse’s work is rooted in invention, and looking at form as a way of tracing thought. Or, as a friend of mine, Bo Berkman says: “asking unanswerable questions in a non-existent language.” As viewers we have to be willing to enter a mental state predicated on empirical looking and seeing: a slow state, a meditative state, a state involving small differences and subtle connections. The meditative state allows us to leave the world by thinking about something harder and longer than usual. By letting the object of meditation into our thoughts it takes us away from our thoughts. It becomes the center for a short time, the thing against which we measure and compare, the thing that lets us see our thoughts and ourselves. These used to be implicit assumptions everyone had when making and looking at art. Doing otherwise was incoherent and chaotic. Hesse’s work always reminds me of the deep pleasures and ample rewards of this way of making and viewing. Her work profoundly inspires and gives me courage to continue.

Tom Butter is a fine artist from New York.

Would she have used less ephemeral materials if she had known that she was going to die at thirty-four? The current exhibit of Eva Hesse’s Expanded Expansion at the Guggenheim begs that question.