Chris Marker: “Make Cats Not War”The Case Of The Grinning Cat, plus 5 shorts

Chris Marker’s latest film, The Case Of The Grinning Cat, was originally released in France in 2004, and played in last Spring’s Tribeca Film Festival. Wandering the streets in search of a response to the current state of the nation, Marker finds himself taken by these unexplained images of cats, which, for him, must be connected to political discontent. 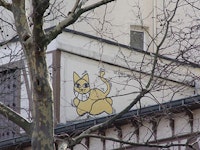 What Dreams May Come

The experience of watching a Quay Brothers film like Piano Tuner may be likened to dreaming, but it more closely approximates living in someone else’s dream. Like the character Felisberto (played by the wide-eyed Cesar Sarachu), you just have to get used to the confusion.

An air of simmering perversion permeates the 1968 thriller-cum-social commentary Pretty Poison. Anthony Perkins’ patented ‘caught with his hands in the cookie jar’ expression was never more convincing than here, in a modern take on the spider and the fly. Tony, contrary to expectations, is not the spider.

Borat: Cultural Learnings of America to Make Benefit Glorious Nation of Kazakhstan obviously has succeeded recently in becoming The Talked About Film and earned the box office grosses to prove it.