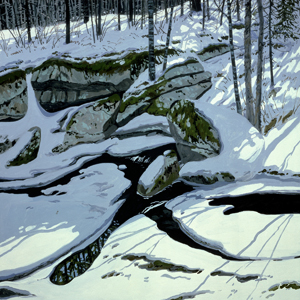 Even when he was living, the maverick American Realist painter Neil Welliver (1929-2005) could have been considered an absentee artist. Absent from New York gallery openings, absent from the painting department that he chaired at the University of Pennsylvania from 1966 to 1989, absent from the discourse of generational rivals such as Alex Katz, and, in a way, hauntingly absent even from his own paintings.

Welliver, who endured a string of personal tragedies (the premature deaths of three of his children, his wife and his best friend, all unrelated, and a 1975 fire that destroyed much of his lifetime’s work as well as his home) and lived the last few decades of his life as something of a hermit, displays in his remarkable landscape paintings an unsettling, voyeuristic, perhaps even necromaniacal sense of intimacy that makes them uniquely intriguing. While the paintings are made with detached, almost deviant precision—as if the artist were making meticulous representations of “nature corpses” in order to achieve a kind of dark, erotic pleasure—it’s hard not to imagine that behind their cool surfaces, indeed in order for their cool surfaces to have been created in the first place, there must have lurked a vigorous, messy, and revealing creative process.

Whenever I view the work, I picture Welliver alone in the woods, somewhere on his 1,600-acre property in mid-coastal Lincolnville, Maine, clad in khaki pants and a pair of waders at the edge of a fast-moving stream, a paintbrush in his teeth and a small French easel precariously balanced alongside the slippery riverbed. A pugnacious art world fugitive who had studied with and then taught under Josef Albers at Yale in the 1950s, yet defiantly rejected his era’s vogue for nonrepresentational painting, out in his element he’d be squinting at the fish, the birds and the far-off horizon, spitting tobacco, chewing his mustache, cursing us all—a roll of Tums in his shirt pocket and his eye zeroing-in on the flat, all-over screen of his life’s obsession….

This was the real Neil Welliver. And this is where he would bring the real, piston-driven landscape—the natural world in its state of constant improvisation—to a shocking and indelible halt, to his trademark, sewn-up graphic solution. Painting en plein air, Welliver made small, roughly two-foot-square studies that he would later blow up into large-scale oil paintings in his barn studio. There, Welliver employed a modified Renaissance technique that involves making a large color-by-numbers style drawing of the study on a sheet of thin brown paper, painstakingly pricking each line of the drawing with thousands of tiny holes, and then pouncing the drawing’s surface with a soft bag of charcoal so as to leave its impression upon a primed canvas. Once the lines were there, he would lay down the oil paint—all mixed to one precise “Welliver” consistency—and methodically fill in the empty graphic sprawl of the canvas, inch by inch, wet on wet, from the top left corner to the bottom right, almost as if he were a human laser printer.

The paintings on view at Alexandre Gallery, which span the latter part of Welliver’s career, get right to the paradoxical condition of the artist’s strange and riveting sensibility. At once pulsating with life and completely deadpan, the landscapes can almost be read as vaudevillian actors on the gallery stage, performing an array of silently spectacular pratfalls. Completely defying convention, they reveal no inner emotion—whether depicting a two-inch cascade of brown water over the ledge of a rock (“Red River Falls,” 1990), or a million tedious flecks of mossy gray light hopping across a stoic stump (“Stump and Ferns,” 1986). The paintings, in other words, truly capture nature in melancholy animation, but with no trace of Welliver’s actual, human emotions, which were, in fact, quite volatile and close to the surface.

Though patently realistic at first glance, Welliver’s works reveal themselves to be far more awkward and clumsy than expected upon closer inspection. Like Bugs Bunny, not only are they funny as vaudevillians, they’re funny as cartoons. For while Welliver hones in and locks down many compositions (“Blueberry Burn Morey’s Hill,” 1997); in others (“Thawed Ledge,” 1998) his tendency is to let the composition distend and droop, as if flouting his great mentor’s “homage to the square.” At times his pond-ish reflections, choo-choo-ing clouds and floppy ferns are of such a preposterously goofball variety that one can’t help but think he must have been going for the laugh.

But the trees and rocks and skies and rivers, no matter how Disney or Hokusai-esque, know not to crack a smile. Like the comedy of Buster Keaton, they hide suffering behind their “old stone face.” It is their duty to remain in character—that’s how this kind of humor works. And even if the humor is working, let’s be honest, none of us are really standing there laughing, are we? Welliver’s work has, for me, always been an inspiringly chilling experience; he never makes a wrong move or second-guesses himself. Hundreds of miles from the work’s indigenous habitat, I stand before the linen surfaces of these crazily meticulous paintings, consumed by Welliver’s ravenous eye, his ruthless machinations of paint, his deliberately heartless gag—his significantly consistent absence. Yes, if you don’t mind, I’m still gonna call it that.