A Note on Botero’s Abu Ghraib

In his book, The Rebel, Albert Camus asked the question of how it is possible to live in a world in which we know that women and children are being tortured. His question was unrelated to taking sides. It was not about which military regime was better or more moral than the other. Instead Camus was asking how can we face the human condition in our everyday lives knowing that such atrocities exist. 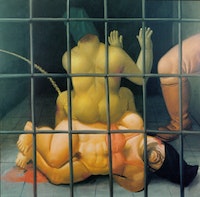 Representation and narrative seem to be the pervasive components of our current visual culture. Yet the idea of describing reality and telling its stories can take many forms, from painting to printmaking, that have served story-telling very well in the past. And now with installation, a form whose verisimilitude can reach greater heights of realism than most, we seem to have attained a state of “hyperreality.” 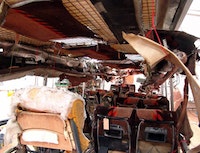 On the occasion of Mike Womack’s first one-person exhibition at ZieherSmith Gallery on West 25th Street in Chelsea, the Brooklyn Rail’s Ben La Rocco visited the artist in his Clinton Hill studio to discuss his work.

Joyce Robins’ ceramic abstractions and Harry Roseman’s simulations of drapery, curtains and napkins can be said to occupy the historical category of bas-relief. 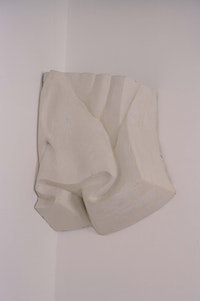 By Geoffrey Cruickshank-Hagenbuckle and Miyuki Tsushima

“Three things happened that year,” recalled Ray Johnson of 1968. “I was involved in a street fight, muggers tried to stab me in the back, and Andy Warhol was shot. The city suddenly seemed to be a disaster, and I decided to move out.” So came the impetus for Ray to resettle in Long Island, as recalled in “The Locust Valleyer,” Lightworks magazine, no. 22, 2000. 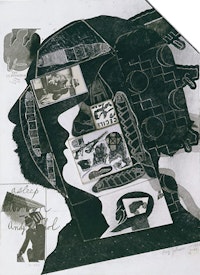 Drew Barrymore stared up at me, saying nothing. She looked elegant, her hair up in a bun, her eyes glowing behind dark mascara. She was perfect, except that her head was about the size of a giant pumpkin.

If you weight a piece of string and submerge it in a glass of water saturated with dissolved sugar, over a period of hours you’ll see crystals, “rock candy,” start to form on the string. In the late 1940s, American artists adopted, at least metaphorically, a similar approach to making art. 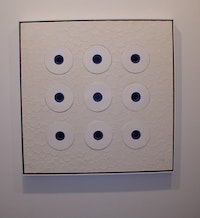 Pierre Klossowski and Hans Bellmer are two twentieth century figures whose controversial artistic production has limited their acceptance by the general public especially when compared with the international reputations of their immediate contemporaries. Paradoxically, Klossowski (1905-2001) was the consummate “insider.” 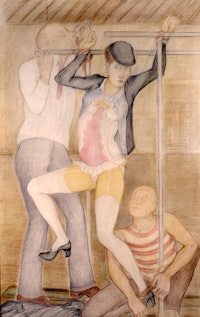 Eija-Liisa Ahtila’s The Wind (2006), a 14-minute, three-screen installation at the Museum of Modern Art, is a disappointment. Not so much for its filmmaking craft but for the tantalizing possibilities it raises yet falls short of realizing.

Keith Mayerson got noticed quickly for an early drawing suite, winningly titled Pinocchio the Big Fag, as well as for his collaboration with author Dennis Cooper on the graphic novel Horror Hospital Unplugged. 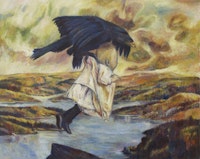 Hiroshi Sugimoto’s seems at the brink of a brave new world in his latest exhibition, Colors of Shadow, which is also his first foray into color photography—though looking at these virtually monochromic images you’d hardly know it. What he presents in this show shoots straight to the origins of art and hints at a new direction for the artist.

One of the revitalizing shots to abstract painting has been the continual critique of its legitimacy by practitioners within the field of painting itself. This dialogue has created a healthy and necessary antagonism that has pushed abstraction well into the twenty-first century, despite the many claims of its imminent death.

Set nearby the warehouse waterfront of Queens that is slowly being transformed into new urban developments, the SculptureCenter presents two exhibitions of equally grand scale that address pointed critiques of our postindustrial era. A monumental sculptural installation by Nancy Rubins and a large group exhibition titled Denial Is A River explore our collective iconography as it has been built up by the mass market throughout the last decade through physical and intellectual deconstruction, while suggesting new meanings with wit and cynicism.

Flu season is upon us—even in Chelsea, where the exhibition H5n1 flu over the cuckoo’s nest at Atelier Paul Kolker pokes fun at our annual free-ranging, collective fear of avian influenza, the notorious, but not-yet-transmissible-among-humans, virus that could spark a global epidemic larger than that of 1918,

Don’t let the initial charms of the quiet, reductive logic of Marietta Hoferer’s drawings fool you. This artist may be a maximalist in a minimalist guise.

Barry Le Va’s current show at Mary Boone is restrained to the point of discomfort. Large chunks of cast resin and rectilinear segments of aluminum are positioned around the gallery according to an impenetrable logic laid out in drawings on view in the gallery’s small rear office. Telltale signs of pointed decision-making are everywhere apparent but the show is obstinate in its refusal to reveal the reasons for those decisions.

Even when he was living, the maverick American Realist painter Neil Welliver (1929-2005) could have been considered an absentee artist. Absent from New York gallery openings, absent from the painting department that he chaired at the University of Pennsylvania from 1966 to 1989, absent from the discourse of generational rivals such as Alex Katz, and, in a way, hauntingly absent even from his own paintings.

Lost Gravity – the Photographs and Performances of Li Wei

Li Wei, a short and stocky man, clambered up a metal ladder ten feet, sticking his head deep into a hole in the wall. Two somber assistants using wire pulleys clipped mountaineering carabiners to his waist and feet, causing him to dangle horizontally, his hovering body a metaphor for pre-Olympic China—headless, suspended, and hurtling towards an unknown future.