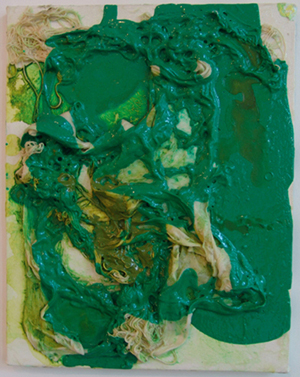 Dona Nelson continues to prove herself as a skilled interrogator of painting. With impatience and glee, she addresses the fundamental questions that have dogged painters over the past century—why, what and how. By turns obstreperous, sexy, violent and transcendent, the six canvases in Brain Stain manage a kind of metaphysical back flip by using bodily experience (both the artist’s and our own) to point us inward towards the cerebral aspects of painting and its history.

Nelson has spent many years thinking about the possibilities posed by abstraction, leading her to make various bodies of work that sometimes appear related, sometimes not. Her current exhibition contains five gelatinous abstractions and “Walnut Way,” an arid, unprimed picture made by rubbing charcoal over the bas-relief of a Nativity scene. The relative abstraction or representation in each of Nelson’s pictures, far from indulging in the current taste for aesthetic smorgasbord, instead underscores her interest in painting processes and how they generate symbiotic images. The artist’s well-known antipathy toward displaying a recognizable or “signature style” can be traced back to the experimental attitudes that permeated the New York City art world in the late 1960s when she was a student in the Whitney Program. The practice of painting at that time had been suffocated by Late Modernism’s formalist and Marxist theorizing while simultaneously trivialized by Pop Art. Serious painters attempted to revitalize it by seeking direction and inspiration in the more opened-ended forms of performance, video and sculpture.

One of Nelson’s abiding interests has been how to make a painting without “painting,” i.e., without making an autographic mark. In the large-scale “Mitchell Street,” the surface is covered with viscous, dark green skeins of cheesecloth and gravity-defying drips and spills that come from all directions. A high-pitched yellow-green seeps up from beneath the cheesecloth, alerting us to a surface that has been literally washed and worn down by repeated applications of a high-pressure water hose. Raised, snotty strands of cloth crisscross the stained field, picking up and holding large areas of Pthalo green paint. Nelson’s use of cheesecloth to mediate between figure and ground is one of her more brilliant moves. Building up the canvas by adding muslin and cheesecloth before pouring the paint, Nelson creates a self-reflexive relationship in which the figure is always pointing back to the ground. Because they are both made of the same cotton material, the figure and ground are no longer oppositional. Acrylic medium becomes the goo that binds them together, like to like.

The thin, gaily-colored ribbons of cut cloth attached to the face of “Gaucho Groucho” seem to speak directly to Pollock’s bravura performance with poured paint and stick. But because Nelson’s cloth lines perch on top of the surface, they are both three-dimensional and illusionistic, looking more like soggy toilet paper or leftover party decorations than AbEx conduits to the subconscious. The painting is hung from wires approximately four feet from the wall so that one can walk all the way around it, further emphasizing its double-sided objectness. A horizontal concrete block delicately holds the bottom edge, acting as a slapstick transition between the rough plane of the concrete floor and the rough picture plane. Nelson began this painting by pouring colors over a stack of unprimed canvases and letting the pigment seep down through the pile. From the back of the canvas, unruly pools of red, orange and green soak into the weave. From the front, these stains serve literally and figuratively as a humorous resist for the glistening gel medium slathered on top.

Two untitled red paintings demonstrate most fully the extent to which Nelson has converted the last 50 years of painting history into her own private mosh pit. Within the artist’s parameters, Abstract Expressionism, Arte Povera, Color Field and Viennese Actionism are linked by their emphasis on the perfomative as well as their use of scale and facture to swing between the painter’s body and the viewer’s. “Untitled” (2004) is also hung from the ceiling by wires so that one can observe the radical difference between the two sides. The face is a gorgeous accumulation of dull, washed-out reds that seem to pulsate with the moody elegance of a late Mark Rothko. On the back, the painting is scruffy and the stretchers have been utterly saturated with pigment. The paint was applied and removed in such a way that the meaty red backside looks as if it has been “marbleized” by fatty slashes of gel medium.

Nelson’s processes—the pouring, scraping, washing, dripping and veiling—joins the transcendental with the visceral, the public face with the private body, the pure with the slapstick. She has said that she likes “the activity of painting under pressure.” To look at her pictures, the pressure of the studio is evident. One can almost chart its trajectory: the promise of conception, the pleasure of action, the frustration, the blind alley, the boredom and finally the satisfaction of a speedy resolution. What we also get to see in a Dona Nelson picture is a very fine artist putting the pressure of History to work in such a way that few painters today have the nerve, intelligence or ability to achieve.

At a time when paintings are projected on walls or traded as digital tokens, Dona Nelson continues to engage viewers in close interaction with painting’s materials: fabric, liquid, and wooden supports.

Bill Jensen said that Ryder’s paintings are made of stardust, and I take his point. By all accounts, his palette was limited and he experimented with glazes and homemade varnishes. So how does the homespun become “stardust”?

It’s heartwarming, and a real rarity, to see so many works by an artist in his hometown—and in a whaling museum, which adds context to both Ryder’s life and the seascapes prevalent in his work.