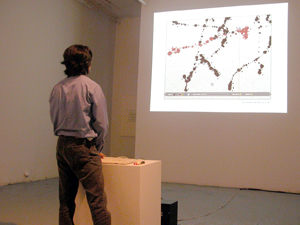 The gripe many skeptics have with computer-based art is that the medium often takes precedence over the message. VertexList, a gallery in Williamsburg devoted to new media art, is wary of this pitfall, and aims to harness the expressive power of technology without drawing excessive attention to the method of delivery. Its current show, featuring three interactive data-feedback experiments by C.J. Yeh, addresses the computer’s ability map input as a metaphor for the Modernist thought process.

Yeh’s exhibition, titled EQUALS, features several paintings depicting the HTML code for digital images of various 20th century masterpieces. Its spine, however, is three interactive computer kiosks. The first, entitled “myBirthday = myPhilipGlass” requires participants to enter their name and birthday, at which point an algorithm designed by Yeh transcribes the information into a musical score. This is played by the computer as dispassionately as if by Glass himself.

More sophisticated and inventive is “myData = myMondrian.” Its interface is a replicated sign-up form for a “My Space” page, requesting a variety of personal information ranging from name and height to more sensitive information such as income and plans for producing a family. Not having entered information on a personal site myself, the form felt invasive and underscored the emotional relativity of the experience (I imagine it feels less intrusive to enter this type of data when the wind of possibly meeting your soulmate is at your back.) Rather than fishing for friends, the result upon hitting “enter” is a quick cyber-mastication of one’s personal stats and their subsequent regurgitation in the form of a Mondrian-esque composition. Somewhat unfaithful to the primary color palette of the modern master, most of the examples pinned to the wall have a color scheme relating to the eye, skin and hair color of the individual entries. Mine looked more autumn-collection Banana Republic than vintage Piet Mondrian.

The most interesting variable in the “myMondrian” experiment is the orientation of the virtual paintings: either a diamond or a square. From a random sampling of examples gleaned from the opening reception, a precious few diamond-shaped personal Mondrians were generated. I was informed that the diamonds were the output of profiles that ranked in the top 15 percent of participating myspace.com members. As it happens, and to no surprise, the rare diamond-shape has a lot to do with income and weight in males, and age and weight in females; my personal Mondrian was a square.

The most prominent of the three kiosks rounding out the exhibition is “myTune = myPollock.” Centered in the small gallery is a computer keyboard facing a projection screen. The keyboard has been converted into an electric piano by the artist, on which visitors are encouraged to play music. Each note corresponds to a simulated Jackson Pollock paint drip. To add variability to the composition, individuals can change their paint color as well as the weave of the raw canvas. Additionally, a looping positioning bar runs across the canvas in order to induce randomness into the dispersions of simulated Duco paint.

The on-screen “drips” look more like circular splashes made from a paint-soaked tennis ball than the skeins and drips in Jackson Pollock’s “Lavender Mist.” Despite the formal infidelity, this project has more to say about the computer’s relationship to the artistic process than either of the other two. There is an unavoidable disruption in control when a participant is unable to identify a key-stroke while keeping an eye on the screen. With this breach in continuity between the conscious and the subconscious, Yeh serves up a clever metaphor for Pollock’s rhetorical irresolution between the side of him that gave the “no chaos, damn it” retort to Time magazine and his claim of attaining “pure automatism.”

The playfulness and easy appeal of this exhibition may end up marginalizing it as science-museum entertainment, and its modernist commentary might be lost on some visitors. But, then again isn’t this a problem with any historically-based inquiry, regardless of its popular appeal? The difference is, when people don’t get Mark Tansey, they keep it to themselves; at this exhibition they’ll enjoy the interactivity even if the metaphor eludes them. If an art exhibition has the moxie to stir up some serious historical discussion while offering free entertainment, what harm can it do?

Beyond the Janus-Faced Typologies of Art and Technology

This column aims to focus on art that engages technology as a medium or a topic. We live in a digital culture and I have found that I better understand the technologies I use, as well as what to reject, in no small part through the thoughtful efforts of artists. I’ve grasped the subtleties of coding and computational design by hearing about how artists struggle with it. I’ve reconsidered the history of art because it suddenly seems so strange that the last five hundred years of creative practice could be presented as if these artists were not responding to, discussing, and adopting technologies ranging from perspective, gross anatomy, printing, navigational charts, biological categories, camera obscuras, trains, electrification, photography, moving image, and here we start to get into the more recent technologies that are so easily disdained: television, computers, the internet, social media