On August 26, the NYC Rumblers, a close-knit group of classic car enthusiasts and restorers, held their sixth annual show, “Kustom Kills and Hot Rod Thrills,” stretching for four blocks underneath the BQE in Williamsburg. From 10 a.m. until 10 p.m., roughly 1,500 people attended the 200-car exhibit and an all-day party at Union Pool. The Nailers, a Kentucky four-piece, played a set as stripped-down and basic as some of the cars were elaborate. Between songs, the singer and upright bassist for the band addressed the audience, many of whom were dancing: “Are you all brain dead from all the burnt tires out front?” “No!” yelled a few people in the crowd. “Yeah!” others called. Fortunately, the scent of barbeque drifting in from the backyard was the most powerful. 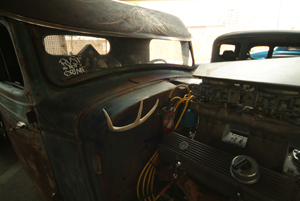 The autos were clearly the stars of the show—all “pre-’64 hot rods, kustoms, stockers, and beaters,” as the posters outside Union Pool described. Many were painted with hot rod flames and adorned with other custom details, like a hood ornament of a winged skeleton. Mint condition models sat alongside beaters that wore their rust spots proudly, several with their hoods propped open to display intricate inner workings. The show was only open to pre-‘64 models, “because after that, they weren’t cool,” says Willie Garcia, who oversees the club’s nine chapters.

“I’ve been to a lot of shows, and this is one of the best,” said Lance Ferrell, who drove his 1933 Ford about 130 miles from Bondsville, Massachusetts to attend. “The people are cool, and the cars are cool.”

Now an international car club, the Rumblers began in 1996 in New York, co-founded by Roger Miret, vocalist for the bands Agnostic Front and Roger Miret and the Disasters, and Paul Saber, who also goes by the name Squirm. From Brooklyn to Hamburg, Germany, the Rumblers have close to 100 members – all male – ranging in age from 20 to 52. They operate as a sort of brotherhood, with members from one area’s chapters often visiting the others’ shows, and providing out-of-town Rumblers with accommodations while in the area. They also help each other locate hard-to-find vintage car parts. “We got guys all over the world that we can just call up. We can pretty much get anything we need. All our club members, we all help out each other,” says Garcia.

It has been largely due to Miret’s touring that the Rumblers have spread beyond New York. “He’s been in bands for the last twenty years. He’s got friends all over the place from traveling around, and he met people into the same thing,” explains Lenny Donghia, the club’s New York City president.

Although they bill themselves as “Hot Rod Hooligans,” the Rumblers seem less interested in raising hell than in maintaining a well-organized series of serious, dedicated car clubs. 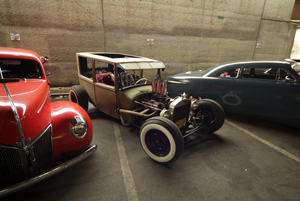 “We try to get people that are going to be positive for the club. We’ve got photographers, musicians, firemen, all kinds of people in this club. When we set rules, we keep by the rules. And there’s penalties if you don’t follow the rules,” Garcia says.

There’s even a clergy member in the club’s ranks—a minister in Albuquerque fittingly known as “The Rev.”

The Rumblers have a statute about who among them can get the signature devil’s head tattoo—only members who have been involved for three years and are in good standing. They do not relish the idea of hot-headed, flighty troublemakers no longer affiliated with the club marked for life with their symbol. “We don’t want people who are going out to car shows or music shows and starting fights,” Donghia agrees. “I guess it’s somewhat of an honor. ï¿&frac12;I guess that’s the right word. There’s a lot of people who want to be involved.”

“We can’t just take anyone,” adds Garcia. “We have to make sure about who we take into the club. We take pride in what we do. We eat, we sleep, we drink, we do everything Rumblers. This is what we do.”

Far from just a Saturday morning tucked away from the fickle weather under the BQE, this year’s action took months to prepare for, and kicked off with a pre-show party at Northsix on Friday night headlined by the Turbo A.C.’s, a local punk rock band. The Friday night crowd, many in town for the event, was clearly looking forward to Saturday. A member of the Los Angeles chapter who called himself Dirty Mick (and had the name tattooed across his knuckles) had flown in on Thursday night. “When we drove to Albuquerque and back in May, it cost $300 both ways for the gas. But one year, we will drive to New York,” he said.

The following morning the cars began to arrive before 10 a.m., purring and chugging from all directions to take up designated spaces on Meeker Avenue. The colorful flotilla drew admiring looks from neighborhood residents on their morning errands. A cab driver hung out of the window at a stoplight to take pictures of the show with his camera phone.

About two dozen cars represented the New York club, with more from the New Jersey branch. There were also a handful of The Nomads, an ad-hoc group from Connecticut, Pennsylvania, Texas, Tennessee, Wisconsin, and upstate New York—those who don’t live close to a city with a Rumblers chapter. The other vintage, hot rod, and “kustom” cars belonged to owners unaffiliated with the Rumblers, who came to exhibit their wheels on a first-come, first-serve basis according to parking spaces available. Other car clubs, including the Toledo Screamin’ Demons and members of the Road Devils, were also on hand, greeting each other and milling around to check out the other cars. A handful of exhibitors sipped late-morning beers among coffee drinkers, as the revving of approaching engines could be heard.

The Hot Dawg Truck, which can usually be found off the Meadowbrook Parkway with its painted flames flickering along both sides, served up dogs from the unadorned to the “Yippie, Yappie & Yahooie Dawg” (with guacamole, salsa, and red onion). Knowledgeable aficionados stood among dazzled passer-bys. “That’s a nice one, wow,” noted a man in shorts and sandals to his young wife and toddler, of a pink and black restored sedan with a front grill resembling a spider web.

“The cool thing is, when you drive in the city, everybody looks,” says Esposito of his 1932 Ford pickup. “It’s like they can’t understand how a car like this still runs.”

Ellen Moynihan is a writer who lives in Brooklyn and has never had a driver’s license.

In 2021, while being interviewed for a story in Art in America, the writer mentioned a paper by Jane Gallop entitled “The Ethics of Reading: Close Encounters” (2000). After the interview, I printed the essay from my home Xerox machine and set it aside. A few days later, while going through my weekly readings, I noticed a smashed bug! It seems that it crawled into my printer and became part of the text itself. A new composition emerged: a smashed bug whose expelled bits and wildly distributed printer toner obscure the original text. With this highly textured new text, we are reminded that a text is never finished. The substrate, the paper, can hold annotations, emendations, evolving textures, and glitches.