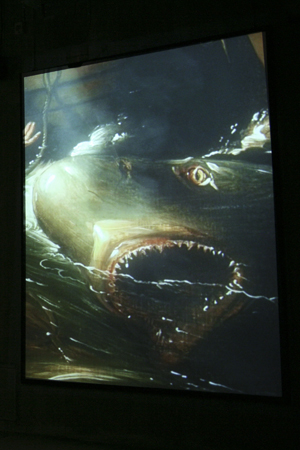 Outré art’s an inside job. Can there still be any doubt? Bad boy/bete noir Mike Kelley is showing in Paris at both the Louvre and the Centre Pompidou simultaneously. A product of Cal Arts, Valencia’s prestigious “post-avant” art program, Kelley now teaches at the Art Center in L.A. While reaping undeniably heavy street cred for the extended summer vacation he took between graduate school and his first teaching job. Even a deafman’s glance at both shows here charts the curve of his decline into respectability.

His Green Depths at the Louvre contains the requisite handful of video panels, deployed in predigested Sensurround displays now necessary for legitimatization by any funded, major cultural institution dosed with plenty of dopey crowd-pleasing appeal. These screens feature woozy zoom-lens “quotes” from a fairly derelict selection of deservedly neglected American historical paintings: bargain basement figures such as Martin Johnson Heade and (never heard of him) Thomas Wilmer Dewing. Is this yet another antic Kelley effort to resurrect unjustly overshadowed art, standing the world on its head in some “transgressive inversion” like his prescient restoration of the already world-famous “Zap” cartoonist R. Crumb? Or his massive photo book “Exquisite Mayhem” slam-packed with costumed Big Time wrestlers, brought into the light at last for kids who don’t dress up on Halloween or even watch TV?

Of Dewing’s “The Recitation” (1891), which portrays a spoken word rehearsal by two women on green fields by the sea, Kelley states in the Louvre’s press release: “If you were to remove the figures you would almost have a Rothko.” Someone’s had too much time to think. X-ray the underpainting of an Andrew Wyeth and you’d get Abstract Expressionism! Shopping wide, might I then “posit retroactively from Twombly” that J. W. Turner’s late unfinished paintings are today complete? Instructively, in our weak-kneed age of (copy cat) “appropriation,” of which this exhibit proves another groaning instance, the single vital piece included in Green Depths is a painting (by Kelley himself!) entitled “The Crotch Shot.” It depicts a detail from John Singleton Copley’s “Watson and the Shark” of an oarsman in a rowboat peering through a standing sailor’s legs during its man overboard melée.

In a return to directness, guts, go-power and a hands-on attack on materials, this picture alone compares favorably with Kelley’s earlier works like “Monkey Island” (1983)—a veritable wall of voodoo in its tomb-sized, psychic box—exhibited contemporaneously as part of the historical overview Los Angeles 1955-1985: Birth of an Artistic Capital at the Pompidou across town. Similarly, the drum, homemade hooting tubes, incunabula and props left lying inert in this survey’s Performance Related Objects (Kelley: 1977-79) prove more evocative than all the technology that I wish were buried in Green Depths.

Mike Kelley’s art shook and staggered us for decades, working in close with its weird science, going at the body like a boxer, getting us where we live. It is strictly his own high standard—the irrational passion and quality of line in drawings like “The Obscure With Its Indeterminate Size” (1984) or his performance “Perspectaphone” (1978), a ritual without myth—that today won’t let him off the hook.

In 1995, Kelley unleashed his “Educational Complex,” which resembled a high school campus compound but instead indexed its psychological binds. Heavily theorized, we were referred necessarily to support texts that merely masked the absence of substance. All I saw was an architectural model: utterly failing to fall under its purportedly regressive sway; I did not recapitulate myself as a homesick wannabe-teen, a 50-year-old fetish fan of Mad Magazine. Perhaps as desperate a ringmaster as is Damien Hirst, himself now fit for the knacker, Kelley, in (2005), then unloaded “Day is Done,” his woe-is-me prom-gone-wrong Disneyfication of Gagosian’s entire Chelsea New York Gallery. A real-life Carrie remake, replete with bad hair, bad skin and badass bands girls don’t wanna dance to. You tell me—is Goth Rock breaking news? Enter Ronald MacDonald into the art historical canon.

If “Day is Done” was a pup tent circus, Green Depths is a tourist trap’s revolving postcard stand.