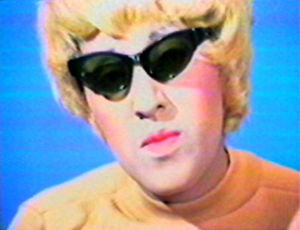 Energy/Experimentation: Black Artists and Abstraction 1964–1980, the current exhibition at the Studio Museum of Harlem, comes at an interesting time. Stylistic, material and conceptual references to color field and post-painterly abstraction appear frequently in the work of many contemporary painters. Once seen as evidence of an investigation into Painting’s outer limits, taped edges, freeform pours and unstretched canvases often appear today as self-conscious signs for the demise of Progress (painterly or otherwise). By focusing on a small group of important black practitioners, Energy/Experimentation presents a freewheeling visual experience that goes a long way towards expanding our understanding and appreciation of Late Modernism as well as the fraught intersection of politics and abstraction.

The exhibition makes plain the fact that the most engaging art is always made in dialogue with the art of its time. The 15 artists included represent one of the first substantive groups of black artists to enter the mainstream from art school. As such, they were both art professionals and self-elected members of the avant-garde who could rightfully expect a certain level of visibility. And yet, as abstract artists working in middle of the Civil Rights Movement, their public position was nearly untenable. Black and white audiences alike expected to see black artists engage in socially relevant, figurative art that specifically took race as its subject. This expectation was at odds with the self-reflexive discourse these artists had engaged as an aspect of their education and that constituted much of the advanced art-making practiced during the period. How each individual negotiates this impossible binary is what gives great spark and relevance to Energy/Experimentation.

The full-on embrace of new materials (circa 1960) such as acrylic paint, non-traditional supports, electronics and electric lights, sets the stage in the central room of the museum. Tom Lloyd’s “Moussakoo,” (1968) is a series of interlocking hexagons made entirely of industrial lamps that flash in alternating colors. Rather than Flavin’s florescent references to office cubicles, Lloyd’s circular lights signal the entry of the street into the space of the gallery. The innovations of post-painterly abstraction—seriality, frontality, and opticality—are all played out in the complex, day-glow geometries of William T. Williams’ “Trane,” (1969) and Al Loving’s “Septehedron 34,” (1970). Joe Overstreet’s “Saint Expedite A,” (1971) consists of twisting canvas planes of red, black and green, unhinged from their stretchers and strung up by rope. Using the recognizable colors of Black Nationalism, there is something bold and enigmatic about Overstreet’s flag-like declaration of freedom from painting’s conventions. Guyanese artist Frank Bowling goes even further in disrupting Greenberg’s directive on painting purity. In his vertical stain painting, “Bartica Born III,” (1969) the faint outlines of the African continent emerge from loose streams of green, yellow and magenta color.

The desire to literally pry painting loose from the wall and revisit its fundamental properties is also evidenced in Sam Gilliam’s “Gram,” (1973). In what could be seen as a flamboyant response to Richard Tuttle’s modest 1967 “Red Canvas,” Gilliam’s rough-cut tondo has been vibrantly stained, folded in on itself and stapled to the wall. Unconventional tools to further investigate mark making and the obliteration of the gesture were also part of the experimental zeitgeist. In Ed Clark’s “Yucatan Series,” (1977) a pushbroom captures the action of the artist’s body at work. To achieve the clotted density of xeroxed text, Jack Whitten dragged afro combs and saws through thick sheets of black and white paint. Howardena Pindell’s shimmering 9-foot grid, “Feast Day of Iemanja II, December 31, 1980,” employs the social connotations of materials (sequins, thread, powder, perfume, to name just a few) to critique monochrome painting and Minimalism, paving the way for such artists as Donald Moffet, Kory Newkirk, Mark Bradford and Janine Antoni.

The curator, Kellie Jones, caps Energy/Experimentation with Pindell’s 1980 video, “Free, White and 21.” The video shows Pindell playing three different roles: a black artist who recounts a string of racist incidents (presumably from her own life), a smug, bile-spewing “lady” dressed in a blond wig and whiteface, and a mute figure who effectively mummifies herself in long, white fabric strips reminiscent of Pindell’s own painting materials. While Modernism itself might be construed as a movement of social aspiration and uplift, the inclusion of Pindell’s video acknowledges the difficult schism experienced by politically active, abstract artists. Like Ad Reinhardt, Rudolf Baranik and many others, the artists of Energy/Experimentation clearly believe in the radical possibilities posed by abstraction. Thankfully, since the 1960s, audiences have become increasingly sophisticated at recognizing and interpreting the social and aesthetic implications of visual culture—due, in part, to the pioneering efforts of these black artists. This evolving public awareness has benefited all of us by making the exchange of complex images more widespread. Perhaps the Bauhaus desire to democratize the art experience and to create of an abstract visual language capable of addressing the world at large was not so quaint after all.

While Sophie Taeuber-Arp is perhaps best known in Europe—given the majority of readings on her work stem from translations in German, French, and Italian—her relatively brief career was a formidable one, to say the least. Sophie Taeuber-Arp: Living Abstraction at the Museum of Modern Art is a magnificent, if not exemplary, exhibition that includes some 400 works intuitively conceived and produced in diverse media by a remarkable avant-garde practitioner.