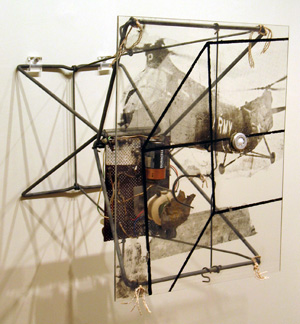 “Standard lines; no traps, no snares.” The phrase is not from a military manual, it’s from an interview with a drummer, but it suggests the elusive language Robert Rauschenberg often employs as titles for his work. In the end, it is up to the viewer to decide if an enigmatic word or phrase leads toward or away from the meaning of an artwork.

Already famous for his combines (the subject of a recent, well-regarded retrospective at the Metropolitan Museum of Art) and the 1958-60 transfer drawings on the theme of Dante’s Inferno, Rauschenberg wanted to start fresh and try to make paintings, simply to paint, without employing the attached objects that had put him in the international spotlight.

The transfer drawings were brilliant works on paper but restricted in scale by their technique: the images were limited to the size of their sources, and they bore telltale signs of the transfer process. In addition, the procedure required young ink, so to speak, and commercially available solvents were often ineffective with certain types of printed material. Photo silkscreen, which Rauschenberg learned from Andy Warhol, allowed for greater flexibility of scale, imagery, and manipulation. Associated with the anonymity of commercial printing, it also eliminated traces of gesture and “expression.” Although many artists had experimented with the medium, including Pollock, Rothko, Reinhardt, and Newman, it was still regarded as industrial or something you picked up in a commercial art class. One museum director reminded me that for years the medium was banned from juried shows.

Working, as he liked to say, “in the gap between art and life,” much of the imagery Rauschenberg adopted came from the magazine named after the latter. The first works are picture combinations, screened in grey and black like the television images of the time, with paint strokes linking the images in fairly conventional European-style compositions. The work of Leger comes to mind. The difference one notices, however, is that despite Rauschenberg’s seemingly easy-going enthusiasm for astronauts and athletes, these pictures appear to be dark meditations on the very uneasy tensions between civilization and technology, peace and violence. If Life magazine’s muses were full-color advertisements for tobacco, alcohol and big business, Rauschenberg’s own inward muses would lead him “astray from the straight road” as Dante had put it.

In 1962 the space race and the arms race dominated the news, followed just behind by civil rights, Communism, and the war in Southeast Asia, and over the Pacific Ocean the U.S. was turning the night sky green and blood red with upper atmosphere H-bomb testing. Rauschenberg had done service in the military—a world of strictly regimented, stenciled identities: “Stalk” includes the image of military truck stenciled “X2” in white, glowing in the darkness; “Night Light” depicts a group of rooftop water tanks resembling sentry towers, its surface paint wiped to simulate a searchlight beam passing across the sky. An untitled work from 1962 presents the unblinking stare of a GE headlamp (the company whose motto was “ Progress is Our Most Important Product ” also was—and still is—a leading manufacturer of military ordnance) paired with three oversized mosquitoes.

Rauschenberg’s mosquitoes bring to mind the swamps of Florida and the jungles of Asia. Mosquito attacks, like helicopters, are first signaled by their sound. In the assemblage “Dry Cell,” a military helicopter is screened on a piece of Plexiglas attached to the frame of a folding camp stool mounted on the wall. A sound sensor activates a small motor that spins a shrapnel-like fragment of metal; it’s terrifying. The largest work, “Payload,” contains an image of a rocket and four men in white jumpsuits affixing a large device to its nosecone. The mosquitoes reappear, along with a glass of water, wet tiles sparkling with light, a mysterious diagram of a four-sided box, a headlight protector, and a key on a chain. The key dominates the composition and seems to refer to the ones used to lock and unlock missile launch buttons. “Untitled” from 1963 recapitulates the water towers of “Night Light,” adding an umbrella and what this viewer reads as a ghostly arm in a rolled-up white sleeve floating in the sky—a kind of signature Rauschenberg outfit, suggesting a self-portrait. Another 1963 untitled work repeats the umbrella motif, accompanied by a building either being constructed or demolished, a flurry of grey paint strokes, and a coda of three dark headlamps. Their lenses are blacked-out discs; only a dim coronal rim glows against the dark ground. Perpetual eclipse, chronologically coincident with Ginsberg’s Planet News.

This exhibition is a chance to see work from private collections, including the artist’s own, that was last presented publicly at the Whitney Museum in 1990-1991. They show Rauschenberg in an introspective mood, in an America at the end of one era of violence and at the beginning of a new one.

Fault Lines, which brings together 12 works by five artists, is the first exhibition in this country dedicated to the remarkable phenomenon of rigorous abstraction among women artists with roots in South Asia.