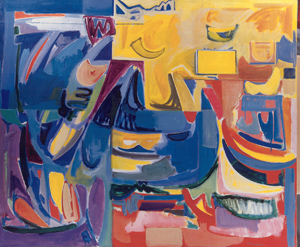 Miriam Laufer and Susan Bee are both painters, the former being the mother of the latter. The concept behind the current exhibition at the A.I.R. Gallery, Seeing Double, is to offer a modest survey of Laufer’s work from the sixties and seventies alongside Bee’s most recent opus of collage/paintings. While the visual (and formal) attributes of their work are relatively distinct, the expressive elements reveal a feminist subtext that relates modernist figuration to postmodern transgression.

Miriam Laufer (1918 – 1980) painted large Fauve-like nudes – as in the two untitled paintings in the exhibition (dated 1964 and 1965)—and medium-scaled abstract compositions, such as “Counterpoint” (1975), also in the exhibition. Laufer’s approach to the two genres is both lively and persuasive. Her bulbous nudes are unrepentant in their dexterity and indulgence, whereas the non-objective paintings seem intent on relieving the turbulent load of metaphysics bequeathed to abstract painting by Hans Hofmann. This is especially evident if one compares Laufer’s bright, fluid primary and secondary hues with Hofmann’s more densely painted fifties abstractions.

Laufer plays on the expressive angst of painting while simultaneously hiding it away. If there is ultimately more play than angst, somehow the darker side of reality feels like the necessary starting point. Perhaps she is seeking a form of sublimation that pushes the artist’s inner conflict to a shattering resolution – “shattering” in the sense of a proto-postmodern fragmentation. In “Counterpoint,” for example, Laufer’s unmitigated invention of natural forms incites a raucous sensuousness across the surface that subverts the classical balance of the composition. In contrast to Hofmann’s exacting tightness, the impulse behind Laufer’s painting appears more contradictory, more transgressive, and thus more abandoned to the irremediable romance of liberation.

Susan Bee’s paintings function on a different level by sustaining a different order. In her case, one might speak of “order” quite literally as a kind of metonymy, in which abstract ideas are signified by concrete symbols: an unconscious Foucaultian order, perhaps, but not entirely. I have always understood Bee’s paintings in terms of allegory, a kind of intrinsic narrative in which nouns and verbs float in suspension of one another. The Cabbalistic and/or Saussurean tree that forms the spine of her recent paintings spreads inexorably across the picture plane, encircling an enigmatic miscellany of pictograms in its branches. It is simply there without a name, yet potentially awaiting its name.

In his famous speech in Houston in 1957, Duchamp talked about the viewer being the one who completes the work of art. The artist has the idea, but the work may or may not transmit the idea. This is for the viewer to decide. So, in a painting such as “Bound and Unbound” (2004), the viewer must decide whether or not to name the tree according to the fragments of imagery that are held within it. But the naming always comes shy of resolution, due to the linguistic parameters that reveal the limits of rational thought. Thus, in one sense, Bee is pushing the boundaries of painting further than her mother (although the two artists possess a similar tactile resonance that opens the surface to an expansion of feeling, both physical and emotional.)

But look at the magazine creatures that occupy the limbs of Susan Bee’s unnamable tree! These images are the ghosts of pulp fiction from another era – an era more tactile in its appeal for significance than our own. Look! There’s Felix the Cat! And look again! There’s the Macarena, the weeping woman who parades the dolorous alleys of Segovia. The trunk of the tree is a dark-skinned mother and child. Egyptian eyes, birds, flowers and pyramids are scattered throughout. The centerpiece – or optical focal point – is a bound woman, a mummy perhaps, in the dark space beneath the branches of the tree. On the opposite side are boy-and-girl storybook characters from the twenties or thirties, haunting our memories from ages past, now enshrouded in mystery.

Bee’s tree is about how memory produces mystery and perhaps how mystery reinvents memory. Her painting is a storybook espionage, a spying on the past, an interlude, an interval between presence and absence, between the naming and the unnamed. Bee’s feminism is bound to the narrative as the story is bound to the feminist impulse to open up the relative past in relation to the relative present, to explore the hidden texts and subtexts submerged under the current veneer of media consciousness. These image/texts seem to perpetually raise the issue of where we are and who we are, as the loss of tactility takes us into a virtual world where feeling is divorced from ideology and narratives reap disaster through ultimate whimsy and absurdity. But for Bee I do not sense the absurd as hopelessness, but rather as a spur for reconciliation, as a matter of dealing with our heads and our bodies, the locus between behavior and language.