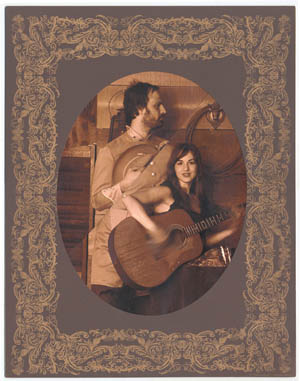 Critical validation and cultural cachet, as it turns out, don’t pay all that well. Touring to promote his records might have, but for David Berman, an intensely private individual, tours (and advertising) have always been out of the question. Berman releases his art into the world to succeed or fail on its own merits—an almost unthinkable position for an artist to take in today’s media-saturated culture with its demands for presence. But the contrarianism is authentic, just a part of the Berman package, which he’ll be first to point out you can take or leave.

This autumn, the release of Tanglewood Numbers will break the Silver Jews’ long silence since 2001’s Bright Flight. Berman, the band’s lyricist and lead singer, is also the author of a phenomenal book of poems, Actual Air (Open City, 1999).

What follows was compiled from a series of email exchanges. Terse and enigmatic, occasionally ignoring questions outright, Berman was nearly impossible to pin down, which was especially frustrating since everyone wants to believe that their musical or literary heroes could easily be their drinking buddies or best friends. But Berman is a man who can say a lot even when he’s not saying much, and his general reticence served to increase the gravity of moments when he actually opened up. Just another part of the Berman package, I suppose.

Rail: Sonically, the new record stands somewhat apart from the rest of the Silver Jews catalog. How did the Tanglewood Numbers band come together?

DB: I don’t have a million friends who make music. The ten or so that do I got to come down here. I got a friend to engineer it. A friend to film some. Everybody from top to bottom I had a personal relationship with. Rail: Of the players, I’d think Stephen Malkmus and Will Oldham are the most readily identifiable. I placed Malkmus pretty easily but I couldn’t find Oldham.

DB: He’s playing rhythm guitar on about half the songs. People think, ‘Why would you get a singer to play guitar?’ That kind of thinking isn’t very imaginative. Will’s guitar-playing has a correlative in my own life in the form of his friendship. Like Paz’s banjo-playing expresses something of what I love about Paz and people with Paz’s qualities. That should give the music some biographical strata, and a sympathetic band to boot, don’t you think?

Rail: Yeah, that makes sense. I knew you were acquainted with Oldham but I didn’t realize you were very close. A lot of what’s written about you just ties you back to Malkmus, maybe at the expense of other friends/collaborators in your life? Well screw that, if it’s the case; how did you meet Oldham?

DB: Will and I have been friends since a summer in ‘95 when he came to the town I lived in (Charlottesville) and rented a house and we set out to make a Silver Palace record. Nothing got recorded that summer but we’ve been close ever since. I’m not very close with Malkmus anymore. He’s kind of far away. Will is just up the road and always down to visit.

Rail: Nashville’s an interesting place. My parents recently relocated to there from South Florida. Why did you move there?

DB: People are funny and optimistic. I love living in a city where music is common currency, where no one second-guesses giving your whole life and all your energy towards the making of it. Bankers, barbers, they all understand that songwriting is a noble pursuit.

Rail: Does your approach vary if you’re writing a poem rather than song, or vice-versa?

DB: Believe me, Justin, and I’m not being rude, but this line of inquiry has never led me or anyone else anywhere interesting.

Rail: Okay, well, what are you reading these days? I noticed Denis Johnson’s collected poems in a photo posted to The Corduroy Suit, which I’m assuming is a photo of your bookcase.

Rail: I read this old interview where you were talking about reading Raymond Carver and Tobias Wolff as a sort of preparation for adulthood. Do you still read with that sort of mindset—of reading to prepare? And does it work?

DB: It’s worked in the sense that reading over a lifetime has consistently widened my sympathy for other human beings, particularly other people in trouble. Following the failures (in terms of the characters’ lives) of Oedipus and Madame Bovary should make you kinder and more aware of the way chance maims our best plans. Rail: Like with touring? I mean, it’s clear that you don’t really want to tour, but I’ve been hearing that you might do it for this record. Do you ever look at it and say, “Well, X would make the whole thing a lot more palatable.”

DB: Opportunities for isolation and space. So maybe a Ryder truck with a living room set up inside it. Rail: Do you ever think about taking a turn as a college professor or writer-in-residence at a university?

DB: I don’t know. Not if I can avoid it. I should stay away from the rock clubs and the English departments if I can.

Rail: Any particular reason? I mean, academia has its drawbacks, obvious and otherwise, but you must have some faith in that system since you got an MFA…Or was it getting the MFA that cured you of that faith?

DB: At that time in my life, getting an MFA and teaching bought me three years in which to become a better writer. Somewhere in those three years I started writing songs. I just mean for the sake of any art form it’s healthy for some to stay away from “central command.” Rail: I suppose Nashville offers that distance. I’ve heard you talk about becoming involved with the Jewish community there. Were you raised Jewish?

DB: No. Rail: Are you of Jewish lineage, or “culturally Jewish” as it tends to get phrased by modern American secular Jews (like myself, for example)?

DB: I was raised outside organized religion and only in recent years have I been able to sustain faith in God for more than ten minutes at a time. The continuance of this relationship through reading the Torah, prayer, etc., I think will be the main thing I work on for the rest of my life. Rail: There’s always been a theological strain in your music and writing, though it doesn’t get talked about much. Not like, say, your Civil War imagery, which people seem to get hung up on. Does it ever feel like reviewers don’t really know what to do with that?

DB: I don’t know. I tell people that the Civil War is too commercial for me now. I’m only into obscure little wars you’ve never heard of.

DB: I was just making a joke about record collectors. In the eighties everyone bought limited-edition seven-inches. The smaller the edition, the better. That seems ludicrous now, when everyone wants to be as “large” as possible. There was a time when obscurity was cherished. So maybe this is a generation thing.

Rail: Maybe. Incidentally, my sister is about to start her last year of high school. Do you have any advice for her?

DB: It’s a thought from Schopenhauer: “In this world there is only a choice between loneliness and vulgarity.”

Rail: That’s a hell of a choice. Have you made yours?

DB: Well it’s been loneliness up till now but it looks like things are changing for the better/worse.

Rail: I tried to frame this next question a lot of different ways, including, “What’s up with all the water?” and, “What does water mean to you?” I finally came up with, “Could you talk about how you use water as an image or symbol?” which sounds more intelligent, but maybe isn’t.

DB: Well, you know no one’s ever asked that before, seriously. It seems obvious now that you bring it up. I was mowing the lawn and it was 96 degrees yesterday and I poured a bottle of cold water over my head and I felt like a commercial even though nobody was looking. Rail: Are you working on another book of poems?

DB: Not intensely. Rail: What about the reissuing of early Silver Jews material? Is that being worked on?

DB: It will be released in October of 2006. A year after Tanglewood Numbers.

Rail: So are you a musician who also writes, or are you a writer with a band?

DB: Neither. I’m a limited edition of one. Justin Taylor is a freelance writer based in New York City. See his collected works online at www.justindtaylor.net, if you’re into that sort of thing.

Justin Taylor is a freelance writer based in New York City.

We Jazz Records and its Many-Headed Helsinki Hydras

Entering the music realms, dreaming of running a record label, programming a festival, publishing a magazine, being visually articulate on the graphic design front, operating a record store, spinning records onstage—or on a radio station—most mere mortals would tend to fixate on just one or maybe two of these pursuits. In Helsinki, the polymath audio obsessive Matti Nives has, during quite a short careering spell, managed to fulfill all of these roles.

Hanging On with Don Giovanni Records

To stand apart from the herd, a label has to be a bit different while remaining a reflection of the community it’s supporting. That’s what New Brunswick, NJ-based Don Giovanni Records has been doing ever since Joe Steinhardt and Zach Gajewski founded the label while attending Boston University back in 2003.

Lexically Sugared Circuits of R/elation: A Conversation with Adeena Karasick

By Chris Stroffolino and Adeena Karasick

When listening to songs, sometimes I feel the lyrics so deeply that I forget that if it weren’t for the voice of the singer and the other less logocentric elements of the song, they wouldn’t have had that power. I get a similar feeling about the “fracturing of language and image” in Massaging the Medium.