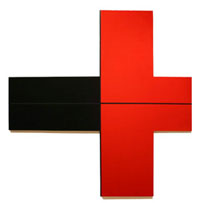 Harvey Quaytman’s current show, Flying the Colors, is strong, deep, and soaring. A celebration of the artist’s bold color work, it features twelve outstanding paintings drawn from the past twenty-five years.

Many of the paintings in this exhibition, such as “Giotto’s Grotto,” betray a level of finesse in their design that, for better or worse, is not always apparent in their execution. Quaytman had a fondness for off-textured surfaces and reflective surfaces embedded with glass that have the same appearance as the roadside stripes lining pedestrian zones. He sometimes employed volatile elements, such as actual rust. More often than not, the real-world wear and tear evident on Quaytman’s acrylic surfaces is what separates his art from mere well-mannered craft. Quaytman was never fastidious in a way typical of most minimal painters—it was probably too small a concern for him. None of these abrasions truly serves any image here but rather reflects an attitude.

Harvey Quaytman kept a secret. He had a display case in his studio, often obscured from plain view, that contained handcrafted models of vintage aircraft. The late Quaytman was no Bluebeard, but he did prefer to keep his hobby to himself—perhaps because he was afraid that it might lead to a literal reading of his abstract paintings.

These early planes were constructed much like paintings. They were assembled by hand, by enthusiasts, and were made primarily of canvas and wood. Their colorfully painted insignia utilized color in a modern and utilitarian manner. The planes were constructed in an efficient, ultralight manner that I believe must have appealed to and informed Quaytman’s own structural sense of design. Most of Quaytman’s abstract painting, either early or late, has been defined by some kind of familiar geometric form (a square, a cross, a rectangle), usually attached to some sort of peculiar structural outrigging that often recalls ailerons or stabilizers. And again, although not literal, Quaytman’s signature use of the cruciform probably has much more in common with a simple constructivist response to a propeller as a discrete design element than to the familiar iconic use of the Christian cross.

Clearly Quaytman’s work is not all about airplanes. The apparent reference to flight in the title is entirely unintentional on the part of the gallery, but in fact both his art and his pastime had much in common. Quaytman was principally a latter-day constructivist, and he was drawn to the early aircraft that were the rage during the original constructivist era. Even Tatlin’s sculpture was once influenced by the skeletal/structural integrity of the first airplanes. Quaytman personally favored the early European monoplanes, such as the Bleriot or the Nieuport, which also captured the imagination of the French photographer Lartigue when he was just a boy on the airstrip with his box camera. Overall, visual allusions to avionics are rife throughout Flying the Colors, and this more than anything betrays the artist’s unique model-builder sensibility. I say this without judgment, and I think this is a more accurate way of accounting for Quaytman’s eccentric approach to formal abstraction. In any case, it is much more generous than calling him “academic,” as some have done in the past. Quaytman’s work is really too inventive for that label to stick, and within the ideal scope of geometry, he was an artist of tremendous and penetrating insight. His knowledge of materials is well known too—Quaytman was the Bowery sage who once advised Brice Marden to try adding beeswax to his paint.

Although geometric, Quaytman’s paintings are never static and are supremely sophisticated in their subtle mechanics. “Antipodes” and “Angel,” also included in the show, are essentially darker variations on the same approach found in “For Sonia Delaunay,” which has one of Quaytman’s trademark cruciforms painted here in flared scarlet. This cruciform is in turn underpinned and shadowed by a black rectangle that causes a slight asymmetrical shift off of its central axis. Two peek-a-boo violet squares suggest the corners of a larger central square at the core of the painting, while the background field is lit up in dense and brilliant yellow. A twin pair of small white stripes, which read as ailerons to my eye, cause interesting spatial reversals within the larger canvas square and allow the yellow to visually expand, whereas the black framing rectangle causes the yellow to contract. (For the record, airplanes were often subjects in the early modern work of both Robert and Sonia Delaunay.)

The largest painting in the show, the commanding “Redwing,” is a cutaway cruciform executed in a striking combination of black and carmine. “Right to Light” contains another familiar Quaytman move. Here the artist has blocked out the four corners of a square with subdominant sets of smaller squares that shift the visual weight of the painting and destabilize the square.

Quaytman was quite capable of painting anything. Bella’s, a coffee shop in Little Italy, was his favorite lunchtime hangout, and the place was adorned with convincing Zurbaran still lifes that Quaytman himself had knocked off in his spare time in order to embellish an otherwise ordinary environment.

Bella’s is now closed, Little Italy has become Nolita, and the painter Harvey Quaytman is dead—the neighborhood will never be the same. His work, however, still radiates an attractive optimism and accounts for exactly this kind of change. Quaytman’s modernist use of oppositional geometry lies closer to the dynamic worldview of Heraclitus than to a Pythagorean or Euclidean order. In Heraclitean verse: “From the strain of binding opposites comes harmony.”