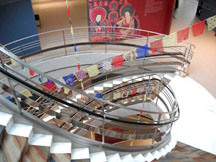 There was a full-blown, fourth of July style fireworks display exploding over my head in what could only be termed a spectacular moment of serendipity. It was as if the universe itself was giving the opening of the new Rubin Museum of Himalayan Art (RMA), housed in the former Barney’s building off Seventh Avenue at 17th Street, a rousing nocturnal hip, hip, hooray for its October 2nd opening. Only later did I find out the show had nothing to do whatsoever with the event, and its mysterious raison d’être was left to the imagination.

Twenty-five years ago, Donald and Shelley Rubin fell in love with a thangka painting of White Tara, the Tibetan female deity of compassion, leading them to purchase their first piece of Himalayan art. That launched their collection of over 1,500 rare artworks, some dating back to the fourteenth century. Rather than let their treasures lie around in bubble wrap, collect dust, and not be seen, they built a museum. It contains a large collection of rare and endangered paintings (called thangkas), sculptures, and drawings in the United States, and the only one in the world specifically devoted to Himalayan art from Tibet, Bhutan, Sikkim, India, Ladakh, Myanmar, Nepal, and Kazakhstan as well as parts of Afghanistan, Mongolia, Pakistan, and Siberia. The artworks are imbued with symbolic and ritual meanings that are deeply encoded in complex philosophical and spiritual traditions revealed in specific stages to properly trained initiates for the purpose of spiritual transformation. The Himalayan region draws influences from Hindu yogic and tantric schools, Chinese court painting, Persian Zoroastrianism, Siberian shamanism, and different local tribal practices and customs. Most of these systems are from traditional cultures that have nuanced levels of interpretation that the New York viewing public may not be familiar with. In order to tackle that formidable issue, RMA has devised a strategy of interpretation by interlacing the familiar with the mysterious and by divvying up its collection into five floors of gradually more intensively themed content. Donald Rubin said “On the most basic level I want them (the audience) to say ‘Wow what a great institution’ and for it to be an enhancement of their own life.”

The 70,000 square foot building is a knockout, with a gorgeous steel and marble spiral staircase designed by Andrée Putnam that leads all the way up to an opaque atrium at its crown. Even the carpeting on the stairs, designed by Liora Manné is woven in subtle tones of greens and persimmon just to adorn that curvaceous beauty. The building itself was modeled by lead architect Richard Blinder, a partner in Beyer Blinder Belle, to create a “mandala like environment.” Mandalas are circles with both a center and fringe, where deities dwell, and they are usually enclosed in a square. The staircase was used as the central circular motif, with the square galleries defining the perimeter. This arrangement lends a spacious feeling to the display of the intricate pieces.

The street level entrance, open to the public, has a green, copper and wood columned café area and accompanying gift shop. Downstairs in the basement level is a photography gallery, currently displaying the large scale format black and white photos of Kenro Izu’s “Sacred Passage to Himalaya.” There is also an adjoining multi media center, and classrooms. Even the veritable Milton Glaser chipped in by designing a distinctive logo of a circle of life enclosed by a square. He also conceived of the backlit copper screen “cloud wall” which opens into the six-story atrium. The Museum’s first weekend extravaganza of shows and story telling had the bustling energy of a Met blockbuster with 120 artists participating in producing multi colored prayer flags that crisscrossed the staircase. Some came who were aficionados of the art, others were just curious. Embarking on an ambitions program of 100 performances for its first 100 days, there is a film and lecture series as well.

Tibetan art, which comprises the greater part of the collection, is for the bulk of Americans an ornate, colorful world of supernatural beings surrounded by a host of bit players with walk on cameo roles. That is because most Tibetan art was unknown except to specialists before 1958, the year of the Tibetan Diaspora, when the ancient tradition was summarily sacked, looted, burned and practically wiped off the face of the earth during the reign of the Chinese Communist Red Guard of the l960s.

The issue the museum tackles is how to introduce and educate the public on the universal themes and tenants inherent in the symbolism of the paintings and other works. The museum’s Level 2 begins this task by introducing to the viewer the sacred traditions of Buddhism and Bon (pre-Buddhist shamanism), and focuses on idealized historical portraits that date from the 3rd century C.E up to the late 1800’s, aptly titled “Sacred Histories, Portraits and Stories.” Level 3 introduces “Perfect Being, Pure Realms,” showing Bodhisattvas, ones who embody compassion coupled with good deeds, the image of the Buddha most people are familiar with. A side exhibit called “Explore Art” has an informative audiovisual display explaining how to view the complex pictures and the meaning behind specific gazes, gesture and hairstyles. 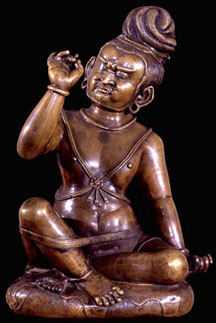 Things start heating up on the 4th level with “Demonic Divine,” which deals with the gruesome and ferocious aspect of the protector or guardian principle. Beneath their wrathful manifestation, protectors actually embody a form of compassion that cuts through the unenlightened ignorance that obscures the true nature of the mind. They appear in many different guises in order to connect with the different varieties of individuals’ psyches. “Portraits of Transmission” on the 5th level looks at how culture, art and religion was developed and focuses on renown poets, statesmen, doctors, philosophers, religious figures and rulers. One 18th century sculpture of Jigme Lingpa, an important teacher of the Dzogchen lineage, is a particularly sophisticated, refined likeness with delicate Sinocized elements. The “Explore Art” section on this floor is especially appealing, displaying colored pigments that are used in thangka paintings and shows a portrait of Green Tara in three stages of development. It also has a continuous video documentary about a thangka painting school in Dharmasala, India, the Norbulingka Institute, which highlights individual artists at work in their studios.

The sixth level leads to the opaque glass atrium at the crown of the building and is titled “Methods of Transcendence,” focusing on the practices of tantric or advanced yoga and meditation. There is an intriguing sculpture of the Mahasiddha Kanha made between the years 1500-1599, showing him wearing a traditional mediation belt wrapped around his knee. These belts, still worn today, were used by yogic practitioners to keep their spine straight during meditation sessions and to keep from dozing off. What is remarkable about this piece is the simplicity of design yet life-like quality, despite its being made of metal. Kanha’s upswept long hair, still worn by Ngakpa’s or tantric practitioners, is rendered in astonishing detail. Originally a Hindu, he was converted to Buddhism by Virupa, a teacher from the famous Nalanda University, tragically destroyed by the Muslim invasion in 1096.

But RMA consists of more than its artwork. The renowned Tibetan scholar E. Gene Smith was brought into the fold as well, taking with him the unparalleled Tibetan Buddhist Resource Center, originally located in Massachusetts. It consists of an encyclopedic database of over 72,000 records of Himalayan literature and history and has recently released digital editions of the Tengyur and Kangyur, some of the most important books in the entire Indic Buddhist world, originally written and printed on hand carved wooden blocs.

When asked what it was like to see his dream actually come true, Rubin replied, “Very few people in this lifetime have a chance to see their dream realized; We could not imagine it; none of us.”

“Everyone you’ve ever been with for a moment”