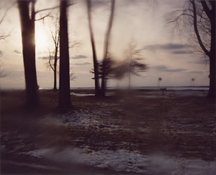 In an exhibition of new color works, Todd Hido sets out to explore a fairly traditional genre: landscape photography. Though marking a significant departure from his critically acclaimed series of suburban houses by night (a project that won the artist a Best First Monograph award from Photo-Eye Books and Prints in 2001), the current installation at Julie Saul Gallery reveals Hido’s ongoing effort to create haunting atmosphere and mystery from what are often considered ordinary motifs.

Favoring dramatic light conditions, Hido portrays his subject matter when vivid evening skies or overcast weather conditions add a distinct sense of sentimentality. In each of the eighteen photographs assembled in the exhibition, the landscapes appear uninhabited, but show traces of alteration and human interference. However, Hido’s ambition is hardly sociological. Employing a pictorial language that unfolds slowly, picture by picture, the effect is astonishingly cinematic. Forlorn roads lose themselves in aimless terrains, while heavy clouds hover above. Barren fields and edges of dark pine forests underline the simplicity of the scenery; the emergence of occasional power lines or telephone poles serves for theatrical effect. An overall dark mood settles deep into the landscape, reinforced by the remnants of recent showers. But it is not only the scattered water puddles reflecting the twilight that bestow a gloomy sheen upon Hido’s images. Captured from the driver’s seat through a rainy windshield, each work has a hint of the surreal.

By leaving the immediate out of focus and zooming in on the safely distant, single raindrops are transformed into blurry smudges, which (at least in the most successful cases) provide the photographic image with an enchanting looseness and watercolor aesthetic. Paired with the almost monotone palette of each work, which brings the characteristics of black and white rather than actual color photography to mind, this quality significantly adds to the works’ evocation of timelessness and nostalgia.

Drawn into this moody scenery, the viewer, alongside the artist, takes on the role of a lone traveler, who without map or compass is invited to contemplate what stretches endlessly ahead. While this Romantic concept of experiencing nature through the boundless emotional submission might lead one’s associative thoughts as far back as the works of Caspar David Friedrich or members of the Hudson River School, Hido’s creative process is unquestionably modern.

Following the tradition of Robert Frank, who in 1955 began to travel the United States by car in order to create his collective portrait "The Americans," Hido uses his automobile to gather glimpses of more immediate surroundings. Eastern Washington State, the California Central Valley, Indiana, and southern Louisiana are some of the main locales for Hido (who himself is a Bay Area resident), but by no means should be understood as regional limitations. Despite the fact that Hido’s landscapes all seem to have sprung out of Northern climates that leave no room for palm trees, white sand beaches, or deserts, the geographical possibilities are abundant.

Roadside photography has been explored extensively since the 1950s, particularly in urban and suburban settings, but Hido’s choice of capturing the landscape from afar while being physically constricted within the space of his vehicle adds a postmodern note. Even if attracted by the scenery to the extent that he desires to translate it, he rejects the adventure of submitting himself further. Sequestered inside his car, nature becomes an abstract concept, a scenic backdrop, which is kept unreachable. In Roaming: New Landscapes the emotional alienation of the individual from nature becomes the artist’s driving creative force and an excellent metaphor for contemporary longing.

Dawoud Bey speaks with Lyle Rexer about his life, influences, and deep thinking around portraiture and landscape photography.