A seaside escape for city dwellers, Coney Island is one of Brooklyn’s most mythologized neighborhoods. Developed by robber barons and political bosses in the 1850s and 1860s, the main attractions were gambling, drinking, and dancing as cabarets, racetracks, and brothels flourished alongside amusement parks and luxury hotels. In the twentieth century, Coney Island became a more populist destination for crowds of leisurely middle-class sunbathers, even though it never quite lost its seedy, sideshow aura. Woody Allen immortalized the area’s 1950s heyday of burlesque and bumper cars in Annie Hall while Lawrence Ferlinghetti’s poetic cycle A Coney Island of the Mind celebrates a magical romance with the carnivalesque world at the edge of the city. In recent years, though, the area has fallen on hard times, largely neglected by historical preservation and urban redevelopment efforts. The current reality is far from the postcard photos of sand packed with idle pleasure seekers that still feed collective nostalgia for a lost era.

Despite recent dilapidation, artist and designer Steve Powers (a.k.a. ESPO) found inspiration in the hand-painted signs that still adorn the rides and arcades, as yet untouched by corporate plastic. In honor of his muse and to help stem the tide of soulless vinyl, Powers began painting signs for business owners he befriended. This summer, in collaboration with Creative Time, over twenty contemporary painters and designers transformed Powers’s informal service into a site-specific display that also functions as critical urban renewal.

Presenting artists from a wide variety of visual practices, The Dreamland Artist Club’s confluence of design and contemporary art in seems natural given Coney Island’s geographical and historical specificity. It’s a world of inventive marketing, far from Manhattan’s corporate grind, filled with amusements dedicated to fun and fantasy, yet still an imminently capitalist enterprise. The pessimism of hard times was not lost on Powers, who observes that, "The reality of the situation is always going to be economic, and we fit neatly into that equation: you couldn’t beat our prices." Working with the proprietors of roller coaster rides, arcade games, and greasy food stands to integrate art into the boardwalk, The Dreamland Artist Club has begun to refresh and transform the visual landscape of Coney Island, bringing the reality a little bit closer to the fantasy.
—Megan Heuer 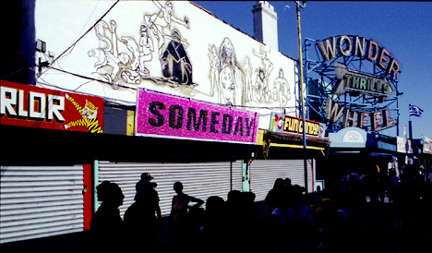 The thousands of tiny metal discs in magenta and silver arranged to spell “Someday” in Jack Pierson’s marquee over a vacant stall along Jones Walk shimmer in the sunlight with melancholy and sentimental fantasies of future possibilities, inspiring a dreamy pause between candy and fortunes in the shadow of the Wonder Wheel. 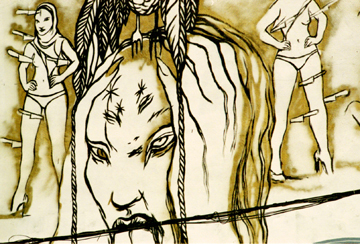 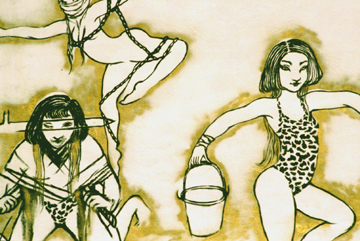 With an aura of danger and seduction, snake charmers, acrobats, and sword throwers return to Coney Island in Rita Ackermann’s 50-foot mural above Jones Walk. Graphically rendered in black, white, and golden yellow against the background of the Cyclone’s sweeping arcs, Ackermann’s femme fatales twirl and pose high above the crowds promoting a demonic carnival of darker, hidden attractions. 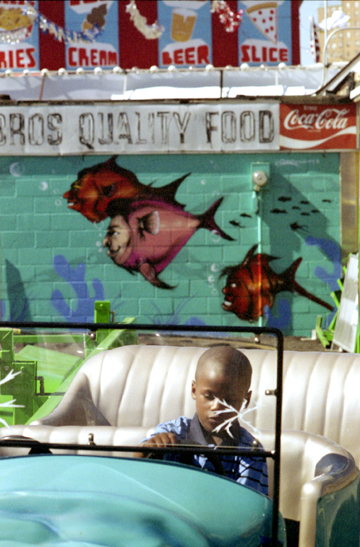 On the side of Lanbros Quality Food at the corner of West 12th Street and the Bowery, framed by Steve Powers’s signs for ice cream, beer, and pizza, Daze Ellis’s aquatic landscape adds a cool blue backdrop to the neighboring ride. An old school graffiti artist, Ellis demonstrates how paint applied in unlikely places can transform a dry city street into an inner city adventure. 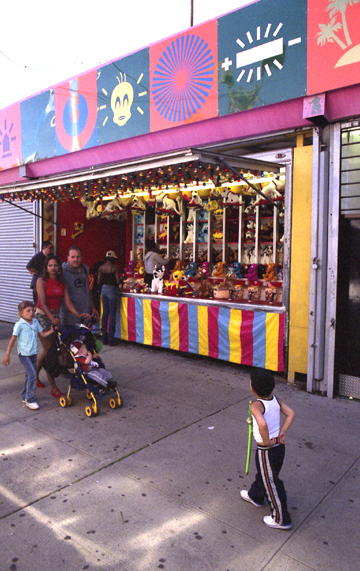 An artist and designer (he has done logos for IBM, Sony, and MTV), Ryan McGinness’s hieroglyphics of luck, fortune, and the carnival of city life adorn the 135-foot long marquee above the arcade at the corner of Surf Avenue and Jones Walk. Icons of subways and mermaids interspersed with blinging dollar signs and diamond rings in burnt orange, chocolate brown, forest green, and chartreuse complement Coney Island’s traditional primary red, white, yellow, and blue, a good omen of artistic renaissance. 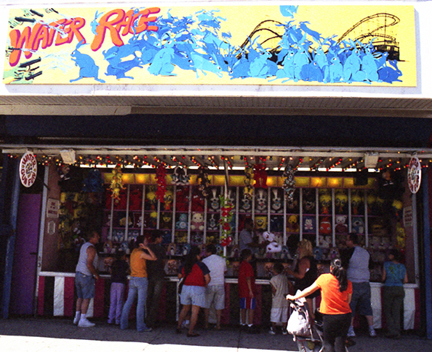 The mural is a familiar form for landscape painter Adam Cvijanovic, and in Coney Island his scenic illustrations do double-duty as history lesson and commercial enticer. The googly-eyed, buck-toothed blue bunnies fleeing jaundiced invaders harkens back to the area’s Dutch settlement in the seventeenth century; “coney” is Dutch for bunny. But rather than clashing with the landscape, these rabbits soar skyward in flight, mimicking the nearby ocean waves and leaving space for the human herds that crest the curves of the Cyclone’s lofty rails. 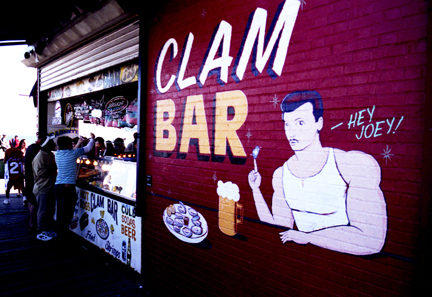 Combining F. Scott Fitzgerald’s tragic 1920s glamour with the tough stylings of L.A.’s Mexican street gangs, L.A.-based Gents of Desire’s wall mural sign for the Clam Bar on the corner of West 12th Street and the Boardwalk entices customers to savor Coney Island’s version of Proust’s madeleine—the taste of beer and clams enjoyed in the salty air recalling the fabulous fabled past of Brooklyn’s Riviera. 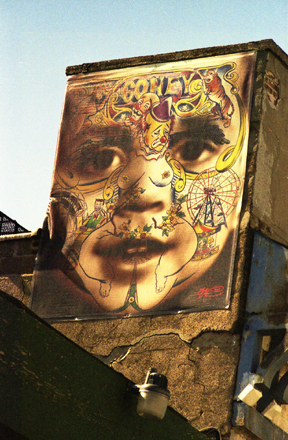 Against the cracked concrete of the exterior of the Coney Island Museum, the soft cheeks and wide eyes of a child adorn a banner by SSUR (the designer Ruslan Karablin). But you can see in his face that this baby is already in the circus, or at least dreaming of the sideshow: combining the Ferris wheel and the burlesque, clowns and tattoos, SSUR’s hybrid graphic mixes the pure innocence of the carnival’s spectacle with its colorful decadence. 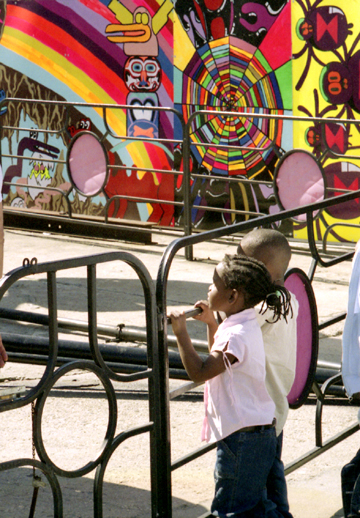 Psychedelic spider webs, cartoon totems, and bug-eyed beasts vie for space and attention in dearraindrop’s pastiche rainbow worlds. Like children scouting out the next great thrill, this collective is always on the lookout for adventure, and Coney Island’s escapades are an ideal site of found collage. However, like the wary yellow chick peering out from a cracked egg, overtones of black magic lend a sinister tone to the buoyant place.

With his signature style of graphic yellow and red text and vaguely hybrid figures of Japanese comics and Mexican kitsch, New York-based Steve Powers painted signs for the El Dorado bumper cars. Playing with the nostalgic pleasure of simple postwar entertainments and their slowly fading glory, a companion billboard reads “Bump Your Ass Off.”
edit