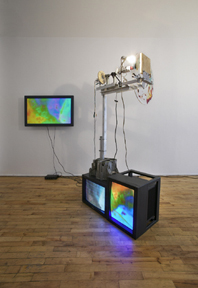 After visiting the monumental retrospective of Dieter Roth sprawling from MOMA to P.S.1, an almost overwhelming revelation for me, Jon Kessler’s carnivalesque installation of new work at Deitch Projects was a fitting continuation.


For Roth, art and life were inseparable, and his work is driven by a sense of tragic urgency. And in spite of his astonishing sweep and volcanic energy, ranging across a multitude of interests and materials, I was utterly exhausted by his defiance of linear thinking or any form of consistent art-making: Roth’s was a nomadic and restless mind that operated outside of the mainstream art world. It was extremely difficult to keep up with his tempo. Needless to say, I was nearly out of breath when I arrived at Kessler’s playful sculptural circus.

Even though the pervasive mood of Kessler’s work is frantic and paranoid, especially in its political and social content, his kinetic constructions as a whole, combining found mechanical parts, motors, lights, cameras, and monitors, have a casual lightness and total submission to process—the emphasis is on making rather than ultimate completion. With the addition of cardboard boxes, clamps, pliers, and plywood—from the transitory to the stable, from the solid form to the ephemeral—Kessler is able to bring a variety of materials together into a unity. The three works, "Heaven’s Gate," "Geneva Mechanism," and "Maiden Voyage," share a theatrical display of spatial intervals between distance and close-up dependent upon multiple shifts of images, some sequential, others repetitive. Consequently, there is a constant changing of scale between what is actually built—a small model of an interior or a real postcard—and the form they take when magnified on the monitors. Yet the visual rotation of all these elements seems to reinforce each aspect. One of the strongest pieces, "The Approach," beautifully contrasts a single standing apparatus and a flat monitor on the wall, which produces an upside-down landscape. Had the landscape been the other way around, the whole would not have had the same impact.

Unlike Kessler’s work from the late 1980s and the early 1990s, which was well-made and aestheticized, this new body of work, all from 2004, is thus far his most engaging and exhilarating effort. One feels the liberated carnival of renewed enthusiasm where the artist has transformed the oldest engineering textbook, Mechanica, into his own. Without much restraint from forces external to the self, one can build models for the world as one would like it to be.

A Brazilian artist in his early 30s relocates to New York where he furnishes his East Village apartment with mattresses that he surrounds with sheer fabric hangings. Soon it becomes a haven for experiments in art-making, love-making, drug-taking and gender-fucking.

22. (The East Village and Points Beyond)

A poet living in the East Village launches a write-in campaign for the 1992 Presidential Election. Promising to turn all her “upcoming art events, readings and performances until election day into political events,” she folds her campaign into the tour of a one-woman show titled “Leaving New York” that takes her to 28 States.