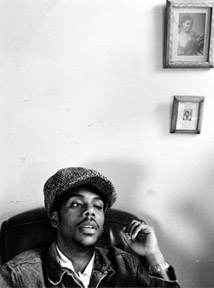 Fort Greene writer-in-residence Carl Hancock Rux has been defying conventions of art and culture since the early 1990s. I first met him ten years ago, when I worked as a bartender at the Nuyorican Poets Cafe on the Lower East Side. Rux had just returned from the Berlin Jazz Festival, where he read his intense brand of half spoken/half sung ontological poetry on stage with Miguel Algarin and Amiri Baraka. The New York Times Magazine had also featured him in a photo spread, sitting between other relative unknowns like Nas, Gwyneth Paltrow, Suzan Lori Parks, and Moby—all of whom were selected as "Thirty Artists Under Thirty Most Likely to Influence Culture Over the Next Thirty Years." Last fall, the Times Magazine featured him again, this time on the cover wearing his trademark applejack hat and military jacket, with a foot propped up on a velvet couch balanced on a median in the middle of Houston Street.

At the time of the 1994 Times feature, Rux had neither published a book nor recorded an album. He’d had a traditional two-act play produced off-Broadway in 1990, but quickly abandoned conventional theatre in order to create non-traditional performance pieces at spaces like Judson Church, the Kitchen, and P.S. 122. The Times’ early pre-product interest in Rux was similar to everybody else’s—nothing about what he did or how he did it reminded you of anybody else but him. Over the last few years, Rux has succeeded in a variety of forms. His 1998 poetry collection, Pagan Operetta, won a Village Voice literary prize. His OBIE award-winning play, Talk, was produced by The Foundry Theatre and The Public Theater in spring 2002. The New York Times called it one of "the most ambitious plays of the season" and Time Out New York named it one of the top ten productions of 2002. (The TCG publication of Talk, complete with Rux’s extensive endnotes, will be available later this year.)

Rux’s novel Asphalt (due out this month from Atria/Simon&Schuster) refashions ancient Greek mythology, the life of a 17th century French playwright, hip-hop/electronica DJ culture futurism and Victorian Fort Greene architecture to tell the story of war and self-renewal. A beautifully written work, Asphalt is set in a post-apocalyptic New York—a lot of it taking place in Fort Greene—and it is as horrifying to read as it is full of hope. Conspiracy theory and the pursuit of love intermingle on quiet war-torn streets. As one of its characters muses, "There never was some anonymous third-world enemy tearing us down. The body was destroying its own body. No God. No Devil. It was us all along, see?"

I caught up with Carl recently in Fort Greene.
—Lara Stapleton

Lara Stapleton (Rail): You composed Asphalt before September 11th. I am astounded at the way the novel imagines our post-apocalyptic imagination. For example, a reading "...New Skyscraper’s Lattice Topples Down" is on your first page. Did your relationship to your own novel change after that day? Did you feel you’d had a premonition?

Carl Hancock Rux: I don’t know if I believe in premonitions, or in me having them—but what drove me to create a post-apocalyptic New York City in the book has more to do with the idea of memory.

Rux: I once heard a lecture by Dr. Veve Clark—she’s a professor of African American Studies at UC Berkeley—where she talked about the environment of memory. Basically, the idea is that everything outside of you acts as a stimulus and becomes information, and how you process that information has everything to do with how you access it in your memory. The concept of war in this book is a lot more personal than it is political. I was thinking about post-war municipal reconstruction as similar to how we reinvent ourselves in response to trauma. In the process of laying new foundations, of trying to recover from crisis, you can ruin old landmarks. I guess it sounds like I’m talking about tearing down brownstones to build stadiums.

Rail: In writing this book, you did a lot of research on Fort Greene mansions and buildings, yes?

Rux: I went looking for certain buildings I’d read about, or the address I saw in an old photograph, and either the building had been torn down or so modified it was unrecognizable. When I bought my brownstone, I tore down a wall that had been erected to separate a room and I found the original pocket door buried inside, with a thousand pipes—crammed through its stain glass. Over the years, as occupants renovated according to their own needs, they were destroying something valuable that lay buried inside.

Rail: Is that the journey of your protagonist, Racine?

Rux: Yes. Racine is a DJ who’s just returned to New York from France. He left before the war began, and returns after it has ended. He doesn’t even recognize Manhattan—new buildings everywhere, and narrow sidewalks. They rebuilt it like L.A., and nobody walks anywhere anymore. In Brooklyn, there is no reconstruction going on at all. Just a bunch of old abandoned buildings, kind of like the South Bronx neighborhood I grew up in.

Rail: Let’s talk about your family history. You grew up in the Bronx but you were born in Harlem. Your mother was institutionalized for mental illness, and your grandmother, who you lived with until you were four, died of alcoholism. You and your brothers went into foster care and were separated, and you weren’t adopted until you were 15. I’ve read interviews where you’ve talked about problems with your adoptive parents—alcoholism, spousal abuse. But your bio for Asphalt is the first time I’ve seen you mention that you are an alumnus of the New York Foster Care system. Why now?

Rux: All of those experiences are part of the city I tried so hard to move away from, literally and figuratively. My agent didn’t understand why I did that, either—why I didn’t say I’d gone to Columbia University, and the American University of Paris, and the University of Ghana at Legon, or why I didn’t mention this award and that prize—but some of those things were about trying to distance myself from my case records. I don’t need to do that anymore. I don’t need to use my CV as a mask so nobody can tell where I’m from originally. Being an alumni—a survivor of a bureaucratic child welfare system—is a real achievement. I’m actually a second-generation system survivor, because my mother lived in a city run assisted living facility for adults with mental illness in the Bronx. She lived there for over 30 years—and she died there. So for me that’s a greater detail than any degree I’m still paying for, or literary prize I can dream of.

Rail: You’ve said that Asphalt is based on Euripides’ Hippolytus and Racine’s Phaedra. Your narrator, Racine, is the hero on a journey from the city of his shame to the city of his integrity. I think of individual trauma—of our broken hearts—and, of course, of America. Why did this story so interest you?

Rux: Jean Racine, the 17th century French poet and playwright, wrote neoclassicist tragedies, all the action occurring in one place, in one day. He had his own issues with family—his parents died when he was very young. He was raised by very strict and very religious grandparents. He also knew a thing or two about self-invention, having completely abandoned his family and their religion to become a famous writer, only to abandon his famous writing career to become a devoutly religious family man. Before he stopped writing plays, he rewrote Euripides’ Hippolytus. In Racine’s play Phaedra, Hippolytus is accused of betraying his father, and he’s kicked out of his father’s house, even though he’s not guilty. If he’s guilty of anything, it’s a childish sense of nobility and truth, the idea that truth always prevails, and so on. Traveling on a road between the city of his shame (his father’s house in Troezen) and what could become the city of his integrity (Athens), he’s attacked by a fire-breathing monster that comes up from the sea. Hippolytus enters into battle for the first time in his life, and defeats the monster—but in doing so he’s thrown from his horse and dragged down the road by it until his body is torn into pieces. I wanted to give Hippolytus the opportunity to re-member both his body and himself, on that road toward integrity.

Rail: One of the reasons this novel is so thrilling to me is that so much of it feels like the New York City worlds I know. Can you talk a little bit about your relationship to places like the Nuyorican and how it may have inspired the brownstone/speakeasy setting most of your novel takes place in?

Rux: The Nuyorican Poets Cafe was a really important place to me, for a thousand reasons. The ethnic and cultural inclusiveness, the range of experience from sidewalk born prosody to collegiate formalism. The fights, the nonsense. On some level, being there in the early 90s, me, and Tish Benson, and Dael Orlandersmith, Paul Beatty, Tracie Morris, Willie Perdomo, Maggie Estep, Miguel Algarin, Lois Griffith—being there every night with these people, it was romantic in the most decadent way, and I feel like I’ve had a few places in my life that have created that warped sense of family for me. It never leaves you.

Rail: Do you feel the support of other artists and writers today, perhaps in the way past movements created schools of thought and style?

Rux: Not really, not as much as I’d like to–because, with the exception of the people who are already my friends and also happen to be writers, I prefer the company of people who aren’t. I don’t want to sit around all day talking about what I’m working on. I don’t feel like writers are supportive of each other—rather, they often are intensely competitive with one another. I’m not sure that’s anybody’s fault, though. Besides, different eras evoke different alliances, and certain arguments are always crucial to what artistic movements respond to.

Carl Hancock Rux will be reading from Asphalt at BRIC Studios (647 Fulton Street) on Wednesday, May 26th, at 7:30 pm, sponsored by 651 Arts.

Lara Stapleton's short story collection The Lowest Blue Flame Before Nothing was an Independent Booksellers' Selection and a Pen Open Book Committee Selection. She is the editor of the experimental fiction anthology Juncture: 25 Very Good Stories and 12 Excellent Drawings (Soft Skull Press). She lives in Fort Greene.

Culture as Strategy for Survival

Erasure of local cultures as a viable tool of imperialism has been systematically used by hegemonic powers since the dawn of time.