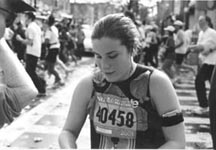 Shishaldin in “Berserker”; Running the NY marathon with cold cuts. Photo by Ling He.

Most of the projects in Shishaldin’s Untimely Career Retrospective were initiated as a quest for spirituality or transcendence within major cultural institutions. In the project "Immortality," for instance, Shishaldin bequeathed her body to the Guggenheim Museum with specific instructions on how it should be preserved and displayed. Claiming to want to "incorporate mortality onto the artistic palette," this project questions artistic production, the way in which it is valued and the role it plays in society.

By directly confronting institutions and conventions, Shishaldin is working in the tradition of the Situationalists and the philosophy of Guy Debord in order to puncture the veil of homogeny over society. Carol Becker discusses these same ideas in a more contemporary context in her 2002 book Surpassing the Spectacle, in which she describes the consumer society as a spectacle that acts as an "invisible veil that prevents us from making a clear evaluation of our situation and organizing to change it."

By initiating dialogues with major cultural institutions in the form of correspondences and performances, Shishaldin attempts to surpass the spectacle by raising questions about the values that these institutions impose upon us. The work is preserved in digital photos, letters, official forms and diary logs, and was displayed at her MFA thesis show as a Power Point presentation. A book containing writing and documentation of all the projects was also available at the show and was a much better form for the work.

In "Berserker," Shishaldin ran the New York Marathon wearing a suit made of cold cuts, claiming to be on a search for a psychic transcendence to enhance physical performance, taking cues from the Berserker Vikings who wore animal hides in battle which enabled them to abandon their humanity and acquire savage fighting power. In "Blubber," Shishaldin claims to seek "Aesculapisn solace" by attempting to get a doctor to agree to perform gastric bypass surgery on her. In a series of correspondences we see how Shishaldin, a statistically normal person, was easily able to convince a doctor to perform this serious operation typically used to treat morbidly obese people.

The project that stood out from the rest was a letter that Shishaldin wrote to Jacques Chirac, president of the French Republic, requesting to marry the French poet Isidore Ducasse (better known as Lautreamont), who has been dead for 134 years. Under an obscure French law the president does actually have the right to sanction marriage between the dead and the living. In the letter to the president Shishaldin writes "as an artist I feel compelled to make a bold statement in defense of marriage as a union that cannot be defined, a union of souls and minds, the sort of union celebrated by art and literature, in fact a marriage of art and literature." This statement is timely, profound, and poetic. Unlike the other projects, it seems to have a touch of sincerity, which balances out the obvious irony that sometimes swallows up the seriousness of the work.

“I’m always reaching for transcendence. I feel like that’s as good a goal as any for music making and as good a reason as any for any human activity, really. How do we get outside of ourselves and how do we connect with each other in that outside-of-ourselves place?” Anderson asked.

11 small paintings—Hill calls them “spells”—line the walls of the gallery. For each, the artist soaks paper in Crisco oil infused with tobacco, allowing it to dry before sewing on small trinkets and mementos found on walks through her neighborhood in Vancouver. The spells are colored with washes of oil paint, and further embellished with magazine cutouts, cigarettes, beer-can tabs, and tobacco buds.