Zeina Abirached was born in 1981 in Beirut, Lebanon. She studied at the Académie Libanaise des Beaux-Arts (ALBA) in Beirut and at the École Nationale Supérieure des Arts Décoratifs (ENSAD) in Paris. The main subject of her work has been the Lebanese Civil War. 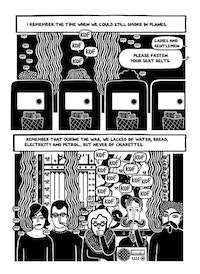