Ballots and Bloodshed: An Election Update from Guatemala

On November 9th Guatemalan voters soundly rejected the candidacy of former dictator Efrain Rios Montt who presided over the worst parts of that country’s civil war during the early 1980s. This was the second election held since the 36-year civil war ended in 1996. During much of the campaign, it had seemed that Montt would return to power thanks in large part to widespread intimidation by paramilitaries, or former members of the Civil Defense Patrols, or "ex-PACs," connected to Montt’s extreme right wing party, the Guatemalan Republican Front (FRG). Along with widespread fraud the campaign saw at least 28 politicians and activists murdered. 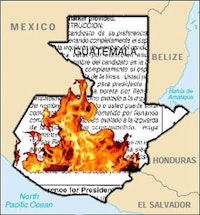