from The Autobiography of a Corpse

By Sigizmund Krzhizhanovsky, translated from the Russian by Joanne Turnbull with Nikolai Formozov, out now from the New York Review of Books

Journalist Shtamm, whose “Letters from the Provinces” were signed “Etal,” among other pseudonyms, had decided to set out—on the heels of his letters—for Moscow. 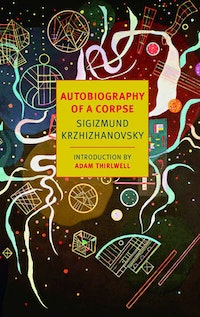