I chose to begin in front of my apartment. I was alone, and I felt a bit silly. It was raining. I was reminded of my great-grandmother, sitting on her porch in Small Town, Illinois. Watching. Day after day after day. This is no longer something that many of us do. 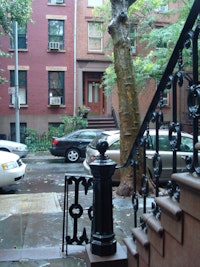 The Meaning of “Live”

What makes a performance live? Is it a shared energy in a single space at the same time? Is it the smell of sweat? Is it simply an agreement between performer and audience?