By Erin Christovale and Rafa Esparza

The following is excerpted from a conversation between Rafa Esparza and Erin Christovale that took place in June in Elysian Park. 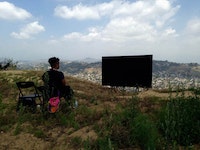