I first met Sarah Cameron Sunde in 2004 at 45 Bleecker just prior to a performance of the Night Sings Its Songs by Jon Fosse, Norway’s leading contemporary playwright. Although Fosse had already been produced around the world and translated into more than 40 languages, this production marked the first in the United States, translated and directed by Sunde and produced by Oslo Elsewhere— a company Sunde founded with her collaborator Anna Gutto. 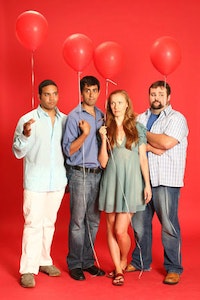