Down below Times Square, where crowds swell and trains screech by, Lorenzo LaRoc plays his five-string plexiglass electric violin. A few blocks south, at Penn Station, the rhythms of Afro-Caribbean beats reverberate through subway tunnels as the United Drummers of Yisrael (UDY) pound their conga drums. To some commuters these musicians are simply nuisances. But to Andrew Rallo they are his "close-knit army of musicians." 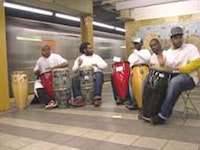