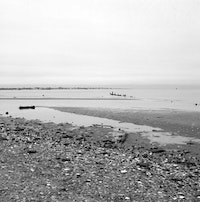 The View Across The River

The last thing to be privatized will be our imaginations.

A Work in Progress

Because one of our Founding Theorists called New York City “a cloacina of all the depravities of human nature,” any discussion of the nature of cities should begin with the enemies of the metropolitan. New York, that hurly-burly port whose streets were mired with shit, loose pigs, prostitutes, and foreigners (by 1640, 18 different languages were spoken here), clearly didn’t fit into the grand Jeffersonian plan.