Detritus and Drawings: The Art of Dineo Seshee Bopape

In her solo exhibition at the Thami Mnyele Foundation in Amsterdam last year, South African artist Dineo Seshee Bopape shoved a gray bicycle into a cracked doorway; hanging from the back of the bicycle frame was a bouquet of roses and baby’s breath, as well as a broken red umbrella.

“Urs is an avalanche that’s eating you,” says Massimiliano Gioni in between bites of pasta. The curator is referring to the amount of work involved in setting up Urs Fischer’s solo exhibition at the New Museum, but this statement also applies to the sheer amount of work produced by the artist since coming on the scene in the early '90s. 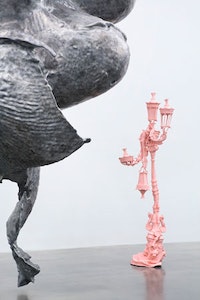