I have written criticism for more than 30 years. Although the idea of art criticism is still the same—it should be analytical and critical—during that period the reviews have changed. And now I talk about newspaper journalism, my professional background. 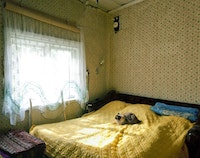