AICA into the Age of Globalization:
from Gentlemen’s Club to Universal Fellowship

The International Association of Art Critics (AICA) was conjured into being, like a rib from its parent body, UNESCO, which had been established in 1945, in the immediate aftermath of the Second World War. 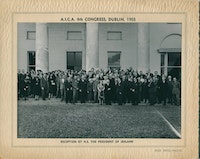