A Mini-Guide to the RNC

By Williams Cole and Heather Rogers

The tens of thousands of visitors to our fair world city during the RNC will have an array of protests to choose from. 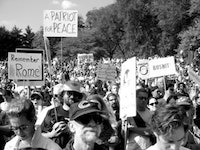 Archives: War as a Way of Life

Think war is glamorous? Then see Tawfik Saleh’s film The Dupes, it is the antidote to the John Wayne-ism of Hollywood’s wars. Made in Syria in 1972, the film centers on three Palestinian refugees all desperately trying to get from the occupied territories’ locked-down ghettos and corrupt, broken economy to Kuwait where they hope to find safety, jobs, and money to send home.

By Christian Parenti and Heather Rogers

From outer space several human-made objects are visible, including the Great Wall of China, the pyramids of Egypt, and just west of New York City, the largest of them all, another monument to civilization: Fresh Kills Landfill, where Gotham dumps its garbage.

By Heather Rogers and Christian Parenti

A crisp wind pushes the smog off to Oakland as evening descends on Valencia Street. Swank SUVs double park awaiting valets, as confident blond girls in Capri pants and their khaki clad men mob the sidewalks, ramping up for another night of wining, dining and loud talk.

A Brief History of Plastic

In 1957, on a small plot in Anaheim, California, the powerful chemical and synthetics manufacturer Monsanto—working with two MIT architects—constructed the first all-plastic house.

There is no other way of getting to the secluded Sagamore except by car, and you can’t be on the island without checking in and getting a paper to place onto the dashboard that says your presence has been paid for. In such tony environs one hardly expects to come across a crew of visitors who are in charge of waste handling in towns across the country—garbage men. 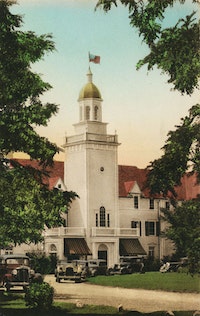 Standing in front of the Mona Lisa at the Louvre in Paris, I notice bulletproof glass encasing the painting. I imagine pulling out a semi-automatic and letting loose on the da Vinci as polyester-clad guards rush me from behind.

Didn’t We All Leave You, San Francisco?

The vast domed hall of the old Armory in San Francisco’s Mission District, which sat empty, rotting for the last several decades, comes to life with martini-swilling dot-commers and real estate developers dressed in army fatigues partying out.