“It all goes back to the hippopotamus,” explains the enigmatic zookeeper, Juan Bulgado. The unfortunate animal is killed in 1957 Havana on the same day that Umberto (Albert) Anastasia is riddled with bullets in a barber’s chair at the Park Sheraton Hotel on West 57th Street. The hippo’s death was a warning to the portly head of Murder Inc. But the news came late, and with this tip, journalist Joaquin Porrata, a twenty-two year old slip of a man, turns pro. The day before page one of this awe-inspiring novel, Joaquin was a gossip columnist. In Dancing to “Almendra,” he investigates underworld Cuba. 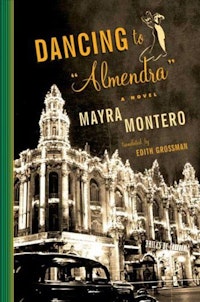 Let’s go back a few years before the fall of communism in the former Soviet Union, when I was on the Upper West Side of Manhattan, in whatever state is most opposite that of grace, utterly ignorant, recently fired, watching my dog die in an apartment on 77th Street and Columbus Avenue...

All the houses we lived in were dark, because when mother was a girl someone had told her that light and moving air carried heat and that darkness was cooler. She kept the windows shaded and shuttered.