by Jean-Patrick Manchette, translated from the French by Donald Nicholson-Smith

In Ivry, at 2:00 p.m., Épaulard took possession of the green Jaguar and the paperwork. The machine dated from 1954. Its suspension was a horror, and acid escaping from successive batteries had made holes in the partition between the engine bay and the interior of the car.

with photographs by Patrice Molinard, translated from the French by Donald Nicholson-Smith, out now from NYRB Classics

It is a cliché to say that Les Halles is the belly of Paris, but it is not fully understood that the place really does fill the guts of a whole horde of people, that it is a magnet for all the diurnal and nocturnal bums who come there to glean fragments of nourishment. 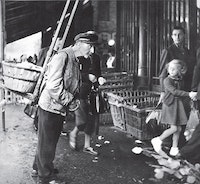 By Jean-Patrick Manchette, translated from the French by Donald Nicholson-Smith

The black Oldsmobile proceeded cautiously over the sand of a beach. Balazs was at the wheel. In the back seat Maurer and Branko sat on either side of a seven-year-old girl wrapped up in a sleeping bag whom they had rendered unconscious with a morphine shot.