Bertolt Brecht wrote plays that are gigantic in scale, plays that seemingly mock performance and people while somehow honoring their most precious parts. Brecht’s plays came to me when I found a copy of The Visions of Simone Machard (1942) on one of those book tables near Broadway and 72nd street. I had just moved to the city. 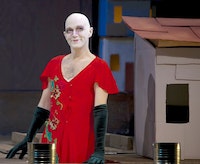