Why oh why are we interested in celebrities? As a phenomenon, celebrity takes up an ever-increasing amount of cultural real estate. It rudely elbows aside far more dignified pursuits, has failed to launch much of substance from territory already annexed, and can hardly be said to appeal to our higher instincts.

David Robbins is an artist and author. His most recent books are High Entertainment (2009) and Concrete Comedy: An Alternative History of Twentieth-Century Comedy (2011). 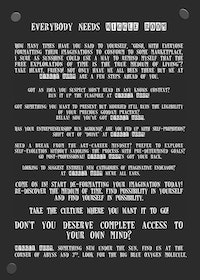