Edited with an Introduction by Daniela Gioseffi (Feminist Press, 2003) In Pericles’s famous "Funeral Oration" of 430 BC, delivered toward the beginning of the Peloponnesian War, he praised the bravery of the dead Athenian soldiers and prepared Athens for the certain deaths that were ahead. But toward the end of the speech, he also remarked on the role of women in war: Perhaps I should say a word or two on the duties of women to those among you who are now widowed. I can say all I have to say in a short word of advice. Your great glory is not to be inferior to what God has made you, and the greatest glory of a woman is to be least talked about by men, whether they are praising you or criticizing you. 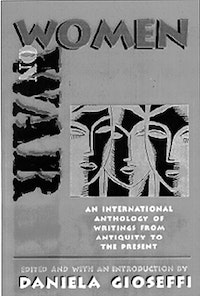