Mira Corpora’s title is intentionally unfamiliar. As Jeff Jackson explained in a Bookworm interview, although the title is an idiomatic Latin expression for “strange and unusual bodies,” and suggestively probes Mira’s array of bodies distorted and made unfamiliar to themselves, it was selected mostly for its suggestive “sound” and ostensibly alien aspect;

Apocalypse of the Vanities

From its very first pages displaying screenshots of a fictitious memory program and infectious, babel-inducing spools of code interrupting the text, Mark Doten’s hallucinatory sci-fi novel The Infernal reveals its situation within a new, digital-mimetic fiction. 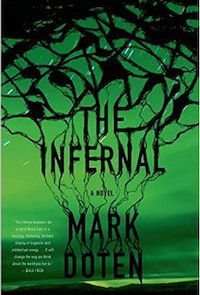