The room leaned forward as Achetez des pommes came on the left screen. There was Linda Nochlin, with her carrot-red hair, asserting what was at the time an unheard-of premise: the anonymous 19th-century photograph of the woman dressed only in black boots and black stockings and holding a tray of apples just below her breasts, was intended for a male audience. Was Nochlin gripping the podium with both hands, demonstrating her own power as she is wont to do when lecturing, when she supplied proof for her hypothesis? 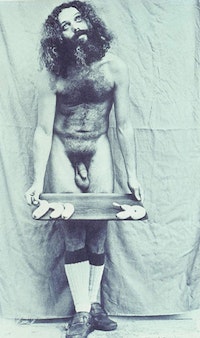