Brandon Downing is a writer and visual artist whose books of poetry include The Shirt Weapon, Mellow Actions, AT  ME and Dark Brandon. Lake Antiquity, a monograph of literary collages from 1996-2008. A feature-length collection of collaged digital shorts, Dark Brandon: Eternal Classics, dropped in 2007. A 2nd volume is forthcoming; see clips at  www.youtube.com/user/bdown6 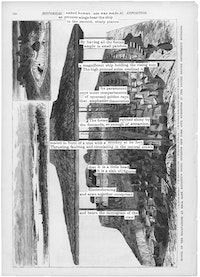 Brandon Downing’s collections of poetry include The Shirt Weapon (2002), Dark Brandon (2005), AT ME (2010) and, most recently, Mellow Actions (2013). In 2007 he released a feature-length collection of short digital films, Dark Brandon: Eternal Classics, while a monograph of his literary collages from 1996 to 2008, Lake Antiquity, was published by Fence Books in 2010. He's recently completed a sixteen-book cycle based around Euripides' The Bacchae. Originally from the San Francisco Bay Area in California, he has lived in New York City since 2001.