This is an event in which there was protest, support, and simple bearing of witness. 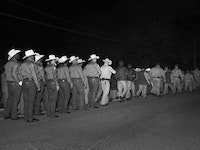