It was a hot day. The sky was hazy, the air was still, and the sun had turned once-green grass to gold. Insects buzzed softly, and warm currents of air gently nudged the tops of the trees sheltering a barn. I was there—emotionally and experientially transported to the summer studio where Wolf Kahn created the most affecting landscapes I had ever seen. 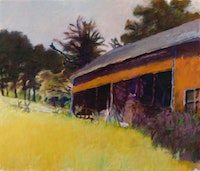