EDM has become an umbrella term for a field with several dozen sub-genres, but it also describes a culture that pasteurized a sound originally created by gay African-American men into party music for straight white bros.

slowthai And The Path Out

When he attacks other rappers who write lyrics about drug dealing for their lack of imagination, he sounds bitter enough that I suspect there’s a degree of self-criticism involved. 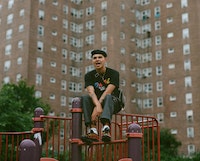 It’s easy to romanticize a certain kind of French cinephilia—seeing movies in 35mm at the Cinémathèque Française and then having long conversations about them in cafés afterward.

Bertrand Bonello’s last film, Nocturama (2016), borrowed imagery and narrative ideas from George Romero’s Dawn of the Dead (1978) and John Carpenter’s Assault on Precinct 13 (1976), so it’s not startling that he would go further into genre territory with his latest, Zombi Child.

Born in Flames, set 10 years after a democratic socialist revolution, stages the disillusionments of the Reagan era against a backdrop of failed promises from mainstream liberalism. Some of the actors in Born in Flames were also part-time sex workers, which kindled Borden’s interest in socioeconomics and feminism in that context. Working Girls, which received a theatrical re-release and became a Criterion Blu-Ray this summer, premieres on the Criterion Channel this month.