Nationalism, Borders, and the State

While the “Abolish ICE” slogan is no doubt well-intentioned, it ought to raise a more fundamental question about the very existence of borders and their relation to the state.

Just over a century ago, imprisoned amidst inter-imperialist war, the Polish Marxist Rosa Luxemburg declared that bourgeois society stood at the crossroads of socialism or barbarism. Exhausted by the bloodshed, the working masses of Europe faced this dilemma. Given that socialism did not come to pass, however, it follows that barbarism has reigned ever since. 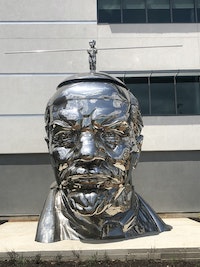 Jean-Louis Cohen is among today’s preeminent historians of modern architecture. Although he first specialized in the Soviet avant-garde, his interests grew to encompass the whole of international modernism. Cohen’s encyclopedic 2012 overview of The Future of Architecture since 1889: A Worldwide History, is as far-ranging a survey as anything written by Siegfried Giedion, Manfredo Tafuri, William Curtis, or Leonardo Benevolo. He has also organized a number of exhibitions on Le Corbusier, Ludwig Mies van der Rohe, and lesser-known architects like André Lurçat.