On April 6 and 7, at the Billie Holiday Theater, Gesel Mason will give the final live performances of NO BOUNDARIES, with a new solo by Kyle Abraham alongside revivals of the pieces by Miller, Roussève, McKayle, Zollar, Harris, and herself. But she’s already busy making plans for the project to continue, in the form of a digital archive. 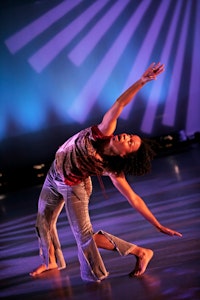 In NO BOUNDARIES: Dancing the Visions of Contemporary Black Choreographers, Gesel Mason is, as she puts it, “a body of research.” Since 2004, she has been learning and performing solos from some of the most exciting choreographers of the past few decades, all of them African American: Kyle Abraham, Robert Battle, Rennie Harris, Dianne McIntyre, Donald McKayle, Bebe Miller, David Roussève, Andrea E. Woods Valdez, Reggie Wilson, Jawole Willa Jo Zollar. Mason can’t dance each piece in a single evening, though the six or seven she takes on at a time constitute a heroic feat, and she always closes with her own solo, No Less Black. In between the dances, she screens footage from her interviews with choreographers. They all talk to her, but you get the impression that there’s a much vaster conversation going on, with sentences and gestures from different pieces inflecting one another, questions begetting questions.