Imagine a Forest Industry of the 21st Century where the act of harvesting preserves the system and the act of preserving the system provides meaningful work for the human community. 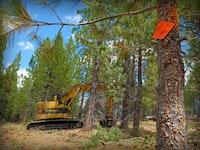